(THE NEW PAPER) - When Dr Chee Soon Juan’s daughter E Lyn returned home one day with a poor score in her mathematics test, she was afraid to show her father the results.

E Lyn, now 13, says she was fearful her father would scold her.

On Friday, the tables were turned.

It was Dr Chee, the secretary-general of the Singapore Democratic Party (SDP), who had returned with a less-than-satisfactory report card.

The SDP candidates, led by Dr Chee, lost to the People’s Action Party (PAP) team in the Holland-Bukit Timah GRC.

The margin of defeat - 33.38 per cent of valid votes won - was well below the 39.92 per cent obtained in the 2011 General Election.
This despite great expectations from pundits and indications on the ground.

Sitting in a room with other candidates at the SDP office in Ang Mo Kio, E Lyn and her sister An Lyn, 16, and brother Shaw Hur, 11, sensed their father’s disappointment.

“Maybe it’s not the time. (But) there will be a time in the future,” An Lyn tells The New Paper on Sunday early yesterday morning.

The defeat is a minor setback, adds E Lyn, reflecting a maturity beyond her years.

So no, you are not likely to see the last of Dr Chee.

“Just keep going and don’t give up,” she says of the future.

“This time it doesn’t matter because next time he can work harder.”

Recently, the siblings and their mother made a video clip to wish Dr Chee, 53, luck in the General Election.

In that video, E Lyn says that despite her poor maths results, her father comforted her and told her not to care about the results as long as she had put in the effort.

Son Shaw Hur had tried to comfort his father during those tense moments when the bad news filtered into the room at the SDP office.

A tired-looking Dr Chee, a former psychology lecturer at the National University of Singapore, sat at the end of a table staring at a laptop screen.

Shaw Hur, a cherubic teen who occasionally stepped outside the room with E Lyn to study the results that were projected on a wall, noticed his father “was kind of quiet in the room”.

Shaw Hur says: “I feel proud of him that he didn’t get so down about not winning this time in the election.” 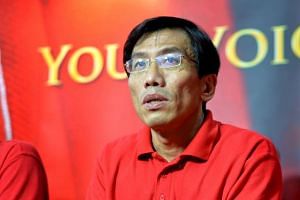 Without a doubt, most of the opposition parties were caught off guard on Friday night.

The major vote swing - 69.86 per cent - has given the PAP a strong mandate. The strong support was attributed to the PAP playing “a masterful campaign in terms of the timing, the use of the state resources and infrastructure”, says SDP’s Prof Paul Tambyah.

SDP failed to secure any foothold in the two GRCs and three SMCs it contested.

Says Dr Chee at a press conference: “Well, I won’t deny that it has been hugely disappointing. But then again...

“There has been a swing against the opposition. People have made their decision. The only thing we can do is to continue to look forward.”

There were mixed signals previously. Online chatter suggested that a more acceptable, newly minted Dr Chee had been impressive in his comeback after 15 years in the political wilderness.

He was absent from the political arena after being declared a bankrupt in 2006. He had lost two hefty defamation suits to former prime ministers Goh Chok Tong and Lee Kuan Yew.

At this General Election, packed crowds greeted his return at his rallies.

Says Dr Tambyah: “I think the image that sticks to my mind from this election is the line of people waiting to get Soon Juan’s signature stretching past midnight on Tuesday night.”

Among the listeners at the rallies were his children and wife.

They were highly visible — online and in person — throughout Dr Chee’s campaign.

“I feel quite proud when he (Dr Chee) goes on stage. The crowd always cheers very loudly. And I feel very happy for him because he has gone so far,” says E Lyn.

Dr Chee’s children seem grounded, with no sign of envy at not having the creature comforts or the latest gadgets of their peers.

E Lyn adds: “Well, my friends will have expensive mobile phones or cars or stuff like that.

“But I think I’m just okay with it because I’m used to it.”

The Chee family had shuffled quietly into the SDP office on Friday and left pretty much the same way, though they looked a little drained from all the campaigning.

Says Dr Chee’s wife, Dr Huang Chihmei: “When you’re tired, you take a break. You rest for a while but you continue.”

They left for their home in Toa Payoh in the family’s old maroon Nissan Presea.

Like its battered owner, the car had a few dents. But it remained worthy enough to continue its journey