She faces Minister of State Sam Tan, 56, and the Reform Party's Kumar Appavoo, 46, in a three-cornered fight.

At her first rally speech at Delta Hockey Pitch on Thursday (Sept 3), she spoke in English, Mandarin and Hokkien.

Here are five things about the activist and blogger: 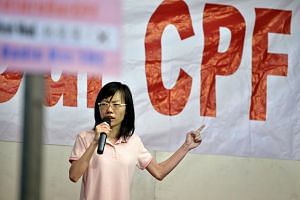 1. Her battle cry: Return Our CPF

Ms Han's protest and campaign slogan is "Return Our CPF". Since last year, she has organised a number of protests at Hong Lim Park to push for her pet cause.

She has said that she became interested in these issues after working in the financial industry.

2. No longer the girl in white

She was charged with committing a public nuisance act at Hong Lim Park which disrupted a charity carnival last year. She showed up in court dressed in an all-white ensemble, donning a white turtleneck and skirt, and even matched it with white spectacles and hairband.

She wore a pink polo shirt with jeans on the campaign trail and during her rally on Thursday.

It is probably safe to say that she will unlikely be pictured in white - the People's Action Party's party colour - during the campaigning period.

Just 24 years old, Ms Han is the youngest candidate contesting this election. She can also claim another accolade: At 33kg, she is almost certainly the lightest too.

The young candidate also revealed that she may get married after the polls. She has said on her blog that she wants to be a mother of four.

4. Rose among the thorns

Some fans of Ms Han who showed up at her first rally on Thursday referred to her as Hua Mulan, a heroic woman soldier from Chinese folklore who disguised herself as a man and bravely went to the frontlines in her ailing father's place.

"Hua" in Mandarin means flower. Probably apt, given that her symbol in the election is that of a flower.

Han is known as HHH or sometimes Triple H - a pun on her initials.

A group of three men even showed up at her rally on Thursday with posters of the wrestler Triple H.