YEREVAN, ARMENIA - Trade and investment links between Singapore and the Eurasian Economic Union (EAEU) were given a boost on Tuesday (Oct 1), with the inking of three pacts.

The deals, part of a free trade agreement between them, will create diverse opportunities for businesses beyond Singapore's traditional markets in Armenia, Belarus, Kazakhstan, Kyrgyzstan and Russia.

Two of the pacts - a Framework Agreement and a non-Services and Investment Agreement - were signed between Singapore, the Eurasian Economic Commission (EEC), the EAEU's regulatory body, and the union's five member states.

The non-Services and Investment Agreement "covers market access for trade in goods via reduction of tariff and non-tariff barriers, as well as other areas that facilitate trade such as competition, customs cooperation, e-commerce, environment, government procurement and intellectual property", said the Ministry of Trade and Industry (MTI).

Singapore also signed a Services and Investment Agreement with Armenia. Similar deals are being negotiated with the other four EAEU members.

When the Free Trade Agreement (FTA) is in force, the economic union's members will reduce or eliminate tariffs on 90 per cent of products Singapore now exports to their markets. 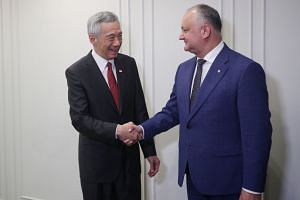 Armenia has much to offer with well-educated workforce, innovation and forward-looking government: PM Lee

These include mineral fuels, oils and their distillates, prepared foodstuffs, machinery, chemical and pharmaceutical products and precision instruments.

"For instance, Singapore and the EAEU will undertake regulatory cooperation in areas such as the protection of investments and intellectual property, promotion of electronic commerce, streamlining of customs processes, and closer collaboration on competition enforcement and trade facilitation," it said.

"These will strengthen trade and investment between Singapore and the EAEU, enhance business networks, and lower business costs."

The FTA was concluded after seven rounds of formal negotiations that began two years ago - what Mr Lee had earlier described as "breakneck speed", as far as FTA negotiations go.

Senior Minister of State for Trade and Industry Koh Poh Koon, who was involved in the talks with the EAEU and its member states, said building rapport with key stakeholders in the five countries and getting them aligned to the FTA's benefits were key to the process.

In 2016, before negotiations began, Dr Koh visited each country to understand their different priorities, and in that same year, a joint feasibility study was launched to show the benefits of the FTA.

Dr Koh said creativity and flexibility were also required in how the FTA was structured, to match how the EAEU functions.

This is because the EEC can only negotiate for goods while authority for the services and investment segments resides with the individual member states, he added.

The FTA is the EAEU's first comprehensive free trade deal.

Singapore companies with a presence in the EAEU welcomed it, saying it will help boost business.

Mr Omar Shahzad, group chief executive of the Meinhardt Group, which has a global office in Kazakhstan, said: "Central Asia is a fast developing region with immense opportunities for infrastructure development whether it is through each country's national budget or BRI (Belt and Road Initiative) projects".

Ace Synergy International a snacks and confectionery exporter, has been selling marshmallows under the CorNiche brand in Russia since 2012, and in Kazakhstan for about 3 years.

Since its marshmallows are made outside Singapore, it will not benefit directly from the FTA, said deputy general manager Srinath Soundarrajan.

But he hopes other Asean countries will also sign trade deals with the EAEU. "That is when we could potentially benefit from less import duties, allowing us to grow the trade between Asean and EAEU."