It is difficult for the various opposition parties to form a loose alliance, given that there are "lots of personalities" involved, but it is not impossible, said Dr Tan Cheng Bock, secretary-general of the newly formed Progress Singapore Party (PSP).

"I have been approached by many of them who... ask whether I can take the lead to form a very loose alliance so that when we come to the General Election, we will be a much bigger force to challenge the PAP," he said.

Dr Tan, who served 26 years as a People's Action Party MP, said he would love to work with the Singapore Democratic Party, Workers' Party and other parties.

Stating that talks are still ongoing but declining to reveal more details, he said: "I hope I can convince all of them to come together."

On why he has decided to set up another political party, Dr Tan clarified that it was not his style to "disturb" other opposition parties' organisational structure.

"I believe I win you through negotiations and understanding of the bigger picture in Singapore. And I think I have managed to win many of them round now," he added.

Even without an alliance, Dr Tan said he would definitely want to avoid three-cornered fights, in which two opposition parties square up against the PAP in a ward, which could dilute their vote share.

"Probably some will have to give in, some will have to move out if there is a better candidate there. That is uppermost in our minds; we don't want to have three-cornered fights," he added, but was tight-lipped when asked where he would contest in the upcoming GE.

To strengthen the PSP team, he said he would be sharing his ex-perience of 26 years in Parliament, and the running of town councils, a community development council and the Feedback Unit.

Asked about recruitment, he said he was encouraged by the numbers he is seeing. "We started three months ago," said Dr Tan. "We have a couple of hundred people. It is a good start... (It is) still too early, we feel that a force is gathering, the numbers are coming." 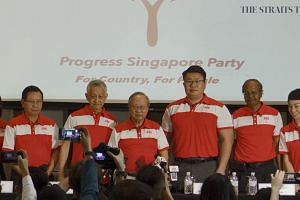 Asked if Mr Lee Hsien Yang is a potential candidate, Dr Tan said they are good friends, but that if Mr Lee wanted to join, it would have to be "on my PSP terms". Mr Lee, who is the estranged younger brother of Prime Minister Lee Hsien Loong, has been open in his support of Dr Tan's new party. The two men have been spotted on a several occasions having breakfast together, once at a hawker centre in the PM's ward.

Dr Tan said his party will be fielding a "very mixed bag" of candidates from many backgrounds, like businessmen, academics, ordinary people and social workers. "What is more important to me is that their heart must be in the right place."