And if necessary, these fees and bursaries will be adjusted, he said in a speech at the Singapore University of Social Sciences' (SUSS') inaugural ministerial dialogue.

He noted that the Government has not yet revised the fees and bursaries for part-time students although it had done so for full-time students through higher bursaries for lower- and middle-income university students, and lower fees for general degree programmes at SUSS and Singapore Institute of Technology.

"We looked at them, but we think that these fees and bursaries should be affordable for working adults," he said, adding that the Government will review the situation and make changes where needed.

The value of lifelong learning and a university education, as well as the future of work amidst technological disruption were among the issues covered during a lively one-hour dialogue between PM Lee and some 500 SUSS students.

PM Lee said the biggest challenge for Singapore's education system is to make it effective for continual learning.

He explained that it was not just a matter of money or about running courses, but having educational programmes that are suited to meet the learning needs and styles of adults - whether they are from Generation X, or in their 70s. 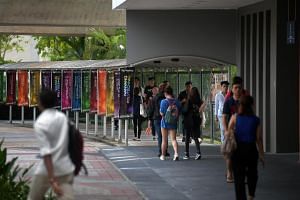 Lower tuition fees at polys, universities for needy students from next year as higher bursaries kick in

Courses offered in polytechnics and universities like SUSS have to be structured in a modular fashion, and lecturers have to be able to adapt teaching styles to help older people to learn at their own pace, he noted.

A whole support system must also be in place, so employers understand and make adjustments when their workers go for courses; and employees can focus on their jobs and studies and maintain a balance, he added.

"We will do it, we've got SkillsFuture SG. But we're still early on in the journey," he noted.

During the dialogue, PM Lee was asked how Singapore graduates fared against those from around the region, who may be more hungry and willing to work for lower pay.

"I think that we have to be hungry too. Because if we're not hungry, somebody will steal our lunch," he said.

"It's a competition which we manage in Singapore because the inflow of talent, the inflow of people from other countries to Singapore, we manage, we track carefully their numbers, their standards, their proportions, to make sure that they don't crowd Singaporeans out and Singaporeans have opportunities for the jobs," he added.

But if Singaporeans are not up to scratch, companies will go to around the region to look for talent, he noted.

Still, he believes that Singapore has a workforce which is good, collective and productive - factors which have attracted firms like Finnish oil company Neste to invest here.

But there are not enough Singaporeans, due to the low fertility rate, and fewer are entering the workforce.

"And so if we don't top ourselves up with talent from overseas...I don't think we will be able to take up all the opportunities which are available to us," he said.

"We open the door, they come, they complement us, we have to work hard. Yes. But we work hard, we hold our own."

One participant at the dialogue also asked for PM Lee's advice on his employability as he felt there was a perception that the other universities were better than SUSS.

Responding, PM Lee said that to level the playing field, SUSS must maintain high standards, and its graduates must fly the university flag high.

Each time Singapore added a new university, a niche was found for the institution, he said.

"If you can excel in that area, whether you graduate as a lawyer or (from) business, or in social work, or in sociology, or in communications, I think you establish yourself as a (graduate of a) first class institution."