Even before he became prime minister, Mr Goh Chok Tong had decided not to write his memoir.

But a note from founding prime minister Lee Kuan Yew and the urging of five friends eventually persuaded him to agree to an authorised biography.

The result is Tall Order: The Goh Chok Tong Story, which was launched yesterday.

"I did not keep a diary of conversations and interactions with people," Emeritus Senior Minister Goh said in his speech at the book's launch.

"A memoir would be seeing events through my own eyes. Bias is inevitable.

"Moreover, unlike Mr Lee's fight for independence and struggle to build Singapore, meticulous notes were taken of my official meetings. Historians will not be bereft of materials," he added.

Mr Lee had also added the inscription: "With my hope that the lessons need not be paid again by the present generation of Singaporeans."

WHAT IT TAKES TO RUN A COUNTRY

We entrust the fate of our country to elected leaders with our votes. Voters can only pick from what are on offer, based on incomplete information and, sometimes, false branding, as we have seen around the world. News media and manipulated algorithm influence the outcomes. This is a major weakness in democratic elections.

I was not a born politician. But I was fortunate to be mentored by Lee Kuan Yew, Goh Keng Swee, S. Rajaratnam, Hon Sui Sen and Lim Kim San, among others. I had my knuckles rapped, more than once. Only when they were satisfied that I could fly Singapore was I allowed to occupy the cockpit.

My book brings out the important aspect of political mentoring, and the training and experience needed to run a country.

I hope my story will encourage the present and future generations of 'technocrats', as my colleagues and I were called once, to serve their country.

It has been a long relationship, productive and harmonious. Chok Tong began as my mentor; we became comrades; we remain lifelong friends. We have somewhat different temperaments and instincts, but we complemented each other well. We developed a strong partnership, not just between the two of us, but across our whole team.

"When I reached 75, I became more acutely aware of my mortality and the weight of his message," Mr Goh, now 77, said. "Several friends had also asked me to write my memoir. Still, I said no. Then, five of my senior grassroots leaders suggested an authorised biography."

"The author would do the heavy lifting - the research, interviews and the writing. The idea of someone looking in from the outside, and unlocking my inner memory, appealed to me."

That writer, chosen by Mr Goh, was Mr Peh Shing Huei, a former news editor at The Straits Times and the co-founder of content agency The Nutgraf.

"Several names were suggested as my possible biographers. I chose Peh Shing Huei. I like his easy-to-read, unpretentious, questions-and-answers style."

Mr Peh and his Nutgraf team did the research, while Mr Goh answered his questions candidly. "We checked and verified my recall of events as necessary," he added.

Mr Goh also asked The Straits Times editor-at-large Han Fook Kwang to be a member of Mr Peh's team. "I valued his shrewdness and insights (into) Singapore politics. He proved invaluable," he added.

"Peh has done a good job in writing up my life till November 1990, when I became prime minister. I am happy with the product. Readers' feedback is positive. There will be a volume 2." 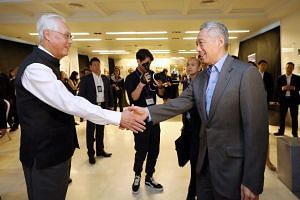 Excerpts from Goh Chok Tong’s biography: Lee Kuan Yew 'never meant for me to be a seat warmer'

In his speech, Mr Peh said he started work on the book a year ago "with more than a bit of trepidation". "For too long, since ESM Goh stepped down as PM in 2004, many Singaporeans had been wondering when he would write his memoir. We all waited. One year became five and eventually, today, 14 years.

"So I knew there were high expectations for this book. We all wanted to know what were his thoughts about global leaders, international affairs and, of course, local politics," he said.

Mr Peh recounted his mounting anxiety before his first interview with Mr Goh, as he had prepared a list of "silly personal questions", such as why Mr Goh did not play basketball despite his impressive height, what he ate at home when he was young and whether his wife was his first girlfriend - all of which are answered in the book.

Mr Peh said Mr Goh answered the questions patiently and even praised Mr Peh for them because the questions forced him to look back and recall things like what he ate as a child. "The answer, by the way, is tau geh, tau kwa, tau pok, kangkung. Not the most exciting dishes," Mr Peh quipped.

He added: "So, thank you, ESM for your patience and for sharing your life with me and my team at The Nutgraf. We are most honoured to be able to tell your story and play our role in telling the Singapore Story."

Mr Goh said the duo not only sat in on all the interviews and gave useful comments, but also chased up additional materials and pored over photographs to select the most appropriate ones for the book.

"Sometimes, what I found interesting, they did not. This reinforces my point that an authorised biography is better than an autobiography," he said.

There will be another book launch for charity on Nov 21, to raise funds for two groups of disadvantaged children: people with disabilities and disadvantaged students with poor grades.

Tall Order: The Goh Chok Tong Story is available at all major bookstores, and retails at $56 (hardcover) and $37 (paperback), excluding GST.

A version of this article appeared in the print edition of The Straits Times on November 09, 2018, with the headline 'ESM Goh on why he changed his mind about having memoir'. Subscribe
Topics:
More
Whatsapp Linkedin FB Messenger Telegram Reddit WeChat Pinterest Print Purchase Article Copy permalink