SINGAPORE - The election expenses of candidates who contested in the general election (GE) this year can be inspected at the Elections Department (ELD), starting on Friday (Aug 21).

They are available for inspection for six months, until Feb 20 next year.

People have to pay the ELD $2 to inspect each candidate's returns.

In a statement on Thursday, the ELD said that under the Parliamentary Elections Act, the election agents of all candidates must submit a declaration and a return of election expenses to the Returning Officer.

They have to do it within 31 days, after the day the GE result is published in the government gazette, the ELD added in its statement. "These returns are required to ensure accountability and transparency in the candidates' campaign finance."

The maximum amount candidates were allowed to spend on each voter in the July 10 election was $4.

This year, tighter rules on election advertising meant that each candidate had to clearly state the amount spent on paid online ads when they submitted their election expenses returns forms.

The cost of removing election banners or posters in breach of the rules also counted towards each candidate's election expenses.

In the 2015 general election, People's Action Party candidates spent $5.3 million on the 89 seats the party contested, while the expenses of the eight opposition parties contesting these seats totalled $1.8 million. 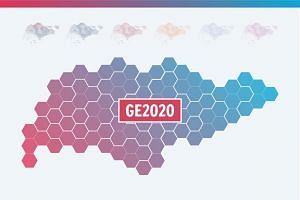 This worked out to an expense of $2.16 per voter for the PAP, and for the opposition parties, 73 cents.

Apart from election posters and banners, money has traditionally been spent on logistics, such as the stage backdrops and technical equipment needed for rallies.

In past elections, candidates have also spent on food and refreshments for volunteers, as well as on training and consultation for candidates on how to manage social media.

People who wish to inspect this year's election returns are required to make an appointment with the ELD at least one working day in advance.