SINGAPORE - Dr Lee Wei Ling has said that she did not sign an online petition calling for the "personal attacks and character assassination" of Singapore Democratic Party (SDP) chief Chee Soon Juan to stop.

In a Facebook post on Thursday (May 5), Dr Lee labelled talk that she had lent her support to the petition "false", saying: "I have a very poor opinion of Dr Chee, and do not think he is fit to be in Parliament.

"The man has not changed at all, though he is now posing as a changed man, using his family."

"Last week, he allowed his speakers to attack (former Bukit Batok MP) David Ong and then came on stage and pretended to be magnanimous and said we should not attack character. When pressed, he admitted he knew what the fellow speakers were going to say," she wrote.

"What do you say about such a man? And having made character attacks, when this is pointed out, he then played the martyr, saying his character is being attacked." 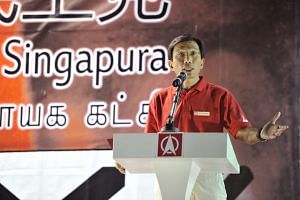 Chee: Who am I running against?

She added: "I will never support such a person. And I believe that his true nature should be fully exposed- cheating NUS, telling untruths all his life, slippery - And Singaporeans should decide whether such a person should be in Parliament. Is it possible that he has truly reformed?! Just look at what he did last week."

Her response came in the wake of a report by local news site The Independent, which pointed out that a "Dr Lee Wei Ling" had signed a change.org petition started by veteran actress Neo Swee Lin.

Ms Neo, who was a guest speaker at the SDP's rally on Tuesday (May 3) night, had read out the petition which she said had been initiated by 30 people from the arts community, academia and civil society.

Separately, former sportscaster and actor Fong Hoe Beng, 74, told The Straits Times that he did not sign the petition, even though his name was reflected as one of its 30 initial signatories.

“This took me by surprise as I do not know Ms Neo personally, and have neither seen this petition nor its content prior to its release. I also did not sign the petition,” he said.

“I don’t know of any other Fong Hoe Beng. Why am I being dragged into this controversy? I'm not interested in the political debate,”he added.

In response to users expressing their skepticism that she was indeed responsible for the post criticising Dr Chee, Dr Lee subsequently put up another post clarifying that her Facebook account had not been hacked.

"My name has been misused, so I needed to publicly announce my view of Chee SC (Dr Chee)," she wrote.

On Thursday night, former MP and 2011 presidential candidate Tan Cheng Bock issued a statement in relation to an image being circulated online. The image was of a recent photograph of Dr Tan, juxtaposed with an extract of remarks that he had made in October 1996 that were critical of Dr Chee.

The statement issued by Dr Tan said that he "states categorically that he has not, and will not, express any opinion publicly on the candidates or issues of the Bukit Batok by-election". It added that Dr Tan had no involvement in "this recent Internet posting".