SINGAPORE - Deputy Prime Minister Tharman Shanmugaratnam yesterday (Sept 28) ruled out the possibility that he might be PM, saying Singapore has a distinctive political culture where each minister contributes to the team in a way that matches his strengths.

This culture has been built up over time and the next PM - who will be “first among equals” - will be decided from among the fourth generation of leaders, he added.

“There’s no urgency to see succession in this term of government. That’s why we’re focused on the fourth generation of leaders, building them up and enabling them to take over during the next term of government,” he said.

Mr Tharman was responding to questions from reporters on recent speculation, including a poll that Yahoo Singapore ran on Monday, that showed him as respondents’ top choice to be Singapore’s fourth PM.

DPM Tharman: "I'm not the man for PM"

“Just to be absolutely clear, because I know of this talk that’s going around, I’m not the man for PM. I say that categorically. It’s not me. I know myself, I know what I can do, and it’s not me,” he said.

“I’m good at policymaking, I’m good at advising my younger colleagues, and at supporting the PM – not at being the PM. That’s not me.” 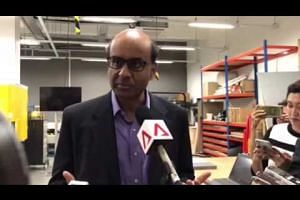 Singapore in for tough period, H2 growth will be weaker: DPM Tharman

Asked if his age was a concern to his being considered for next PM, the 59-year-old said: “I’m quite clear about this. I know who I am and I know what I’m capable of doing, and I know how I am best able to serve Singapore.”

Mr Tharman cited as examples Old Guard stalwarts Goh Keng Swee and S Rajaratnam, saying: “Their contributions to Singapore were immense, and till today they are in a league of their own, but even they would not have been ideal as a PM.”

He said Dr Goh was a remarkable person without whom Singapore would be much poorer and much less secure, but “did not have the temperament to be PM and did not want to be”.

As for Mr Rajaratnam, an “extremely good foreign minister”, “he wasn’t cut out to be PM, he knew it, and no one regards him the lesser because he wasn’t PM.”

“I mention them as illustration. I myself and no one in future is going to come close to Dr Goh and Rajaratnam’s contributions to Singapore, but even they would not have been ideal as PM,” he added.

As for Singapore’s political culture, he said: “No one is out to outdo someone else in Cabinet, or worse still to undermine someone else in Cabinet because he or she could be a competitor to them. Everyone is in this as a member of the team. It’s a culture that we’ve built up over time that we must absolutely keep.”

Mr Tharman added that he sees this in the fourth generation of leaders, some of whom entered politics in the 2011 elections, others in 2015.

DPM Tharman is confident of the fourth generation leaders, says one is going to emerge as leader

“I’ve seen how they work together, I’ve seen them building up trust with each other,” he said.

He also made clear that Singapore does not face an “immediate problem” when it comes to succession, because PM Lee Hsien Loong is healthy despite a recent scare at last month’s National Day Rally. PM Lee is “still on top of the challenges that Singapore faces”, and is highly regarded by the international community, Mr Tharman said.

PM Lee has previously said he plans to step down some time after the next general election, which must be called by Jan 15, 2021.

Mr Tharman said there are a few fourth-generation leaders who could be “first amongst equals during the next term of government”.

Asked whether the list of potential PMs has narrowed for him, he said: “We all have our sense as to who has the potential to be the first among equals and it doesn’t lessen the contributions of the others.”

“Who thinks lowly of Raja and Goh Keng Swee? They were towering figures, but not everyone is suited to be the PM,” he added.

“The whole idea is build a strong team to take Singapore forward, and I’m confident of that in the fourth generation. I’ve watched them; I know them well,” he said.

“Some I’ve known for a long time like (Finance Minister Heng) Swee Keat; some others over the last six years. I’ve confidence in them and some of us in the third generation would be around to support them.”