SINGAPORE - Deputy Prime Minister Tharman Shanmugaratnam has come out to clarify his views on the mainstream media and the Bukit Batok by-election, topics which he was asked about during a dialogue with students last week.

Mr Tharman said that contrary to what social media commentators have claimed, he did not agree during the dialogue that the People's Action Party had engaged in "gutter politics" in the Bukit Batok by-election.

In a Facebook post on Thursday (Sept 28), he said: "That is not what I said, and not what I believe... I did not entertain the assertion about the PAP engaging in gutter politics in Bukit Batok".

Mr Tharman also elaborated on his comments about the mainstream media, saying he regards the media as "serious-minded, responsible players in an evolving Singapore democracy - helping to take it forward, but airing views in a way that avoids fragmenting society".

The Deputy Prime Minister was clarifying comments he made at a a dialogue last week, where he was asked by a student about media control and whether he agreed with the "gutter politics" of the ruling party during the 2016 Bukit Batok by-election.

The dialogue followed a speech he gave at the Nanyang Technological University Majulah Lecture last week on the future of education.

In responding to the question, Mr Tharman had said that Singapore has become more open over the years, though there were pushbacks at times.

He also said: "I don't agree with every tactic by every one of my colleagues. But I have to say that if there is something that defines the PAP, it is its insistence on character, honesty, and being true to Singaporeans."

On Thursday, he said his comments have been misconstrued by some to mean that he agreed with the accusation about gutter politics, and he wanted to make his views clear.

During the by-election campaign, the PAP had contrasted the character of Singapore Democratic Party chief Chee Soon Juan with that of their candidate, Mr Murali Pillai, and highlighted how Dr Chee had said he was proud about his past.

The SDP accused the PAP of gutter politics for doing so, saying that questions of character should not be raised during elections.

Recounting this in his Facebook post, Mr Tharman said: "I stand by what the PAP and my colleagues said. The PAP was not engaging in gutter politics."

As character is at the heart of politics, he said, raising questions about an election candidate's character did not amount to gutter politics.

He added that character was an important measure of a candidate, and by looking at a politician's actions over time, voters can judge his motivations and integrity, and decide whether they can trust him.

"If Singaporeans ever come to ignore the track record and integrity of politicians, in the PAP or any other parties, it is Singapore that will end up in the gutter. That has been the story of many nations," he said. 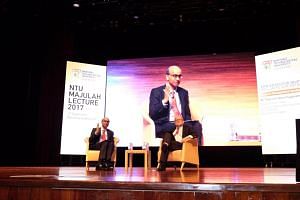 Mr Tharman also acknowledged that, more generally, there were occasional differences of views on issues within the Government and within the PAP.

"Of course there are, and that's healthy," he said. "But once any course of action is decided, there is no question that we take collective responsibility for it in the leadership."

In his post, Mr Tharman also clarified his remarks on the mainstream media.

Reiterating a point he has made in the past, he said while the mainstream media in Singapore is not a "free-for-all", it is also not the "heavily controlled media that some critics caricature it to be".

He added that the mainstream media "doesn't wait around for instructions, and it doesn't excuse everything Government does", and in fact plays a crucial role in advancing democracy.

"In my opinion our media does a better job at advancing the collective interests of Singaporeans than that in several other Asian countries, where the media has added to a divisiveness in society not seen in a long time," he said.

"Even in some of the mature western democracies, people are segregating themselves into media bubbles of their own - both in the mainstream and social media - and public trust in the media is now at an all-time low."

He added that the mainstream media in Singapore carries all the important news of the day, including articles about both sides of the political debate.

Noting that Singaporeans read things and discuss them freely, he said: "So blaming the mainstream media for electoral losses is not a good strategy - it doesn't square any more with the reality of a public that reads, follows issues and thinks more critically."

He added: "We should keep this going - the mainstream media as responsible players in our democracy, helping to move it forward. We should hope too that the middle in the social media gets stronger, for Singapore's good."