SINGAPORE - Defence Minister Ng Eng Hen visited Singapore troops in Iraq on Tuesday (Sept 26), and he declared them to be "in high spirits".

The Singapore Armed Forces (SAF) medical team has been deployed to Iraq since June this year to provide medical support to multinational coalition forces countering the threat there from the Islamic State in Iraq and Syria (ISIS).

The coalition forces consist of troops from the United States, Australia and New Zealand.

Dr Ng was briefed by the SAF medical team on their tasks and responsibilities, and saw a demonstration of the team's in-theatre medical capabilities.

Dr Ng said in a Facebook post that the Singapore troops "provide excellent medical care for coalition soldiers there".

He also emphasised the importance of their mission in Iraq and expressed confidence in their ability to carry out the mission, added a Defence Ministry statement.

Dr Ng was accompanied by Senior Minister of State for Defence Maliki Osman, Chief of Defence Force Lieutenant-General Perry Lim and other officers. 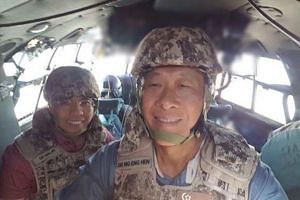 During the visit, Dr Ng was also briefed by coalition commanders from Australia and New Zealand.

Dr Ng wrote on Facebook: "The coalition commanders I spoke to gave two pieces of good news. One, that ISIS is falling faster than anticipated and now reduced to pockets of resistance in Iraq and second, the Iraqi Army has raised their capabilities over time.

"We should all take heart in this progress, and that the battle against extremist terrorism is being won by countries who believe in law and order and the rights of their own citizens to choose their way of life."

He added: "At the same time we must remain vigilant, as the threat of terrorism increases in Asean."

At the briefing, the coalition commanders stressed that the support of partners like Singapore was vital in the fight against the terrorist threat.