Though Govt will make initial call to act on a falsehood, this decision can be challenged

There is a need for the Government to make the initial decision to act against falsehoods which could go viral in a matter of minutes, but it is the courts that will be the final arbiter of what is true and what is false, Law and Home Affairs Minister K. Shanmugam said yesterday.

Speaking on the draft law targeting online falsehoods, he also noted thatit covers only false statement of facts, and does not cover criticism, opinions, satire and parody.

The Protection from Online Falsehoods and Manipulation Bill, introduced in Parliament on Monday, is designed to protect society against the harm caused by fake news.

It provides for criminal sanctions against those who deliberately spread falsehoods to cause harm, and also gives ministers the power to order corrections or removals of online falsehoods, among other things.

This has sparked criticism in some quarters, with some people saying that the proposed law makes the Government the arbiter of truth.

Addressing the concerns, Mr Shanmugam told reporters at the Ministry of Law that it is "completely not the case" that the Government makes the final call on what is true or false.

The Bill gives ministers the power to make the initial decision on a falsehood because there is a need to act fast to prevent its spread, he said. 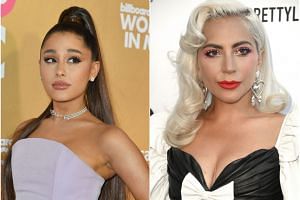 No ban on things just because some people find them offensive: Shanmugam

"There can be massive consequences when people deliberately put out and trade in untruths, so it has to be dealt with quickly. Within a few hours, the falsehoods can travel very far," he added.

But the minister's decision can be challenged in court and can be overturned, he said. "The courts decide ultimately what is true and what is false, and they will be the final arbiters," he added.

The Bill also allows a minister to order the correction or removal of any online content only when two criteria are met: It must be a factual falsehood, and it has to harm the public interest.

Citing examples, Mr Shanmugam said such falsehoods could have dire, real-world consequences, which is why they must be removed quickly.

For instance, a false story about two Muslim men raping a Buddhist woman in Myanmar had sparked lynch mobs within 24 hours, leading to deaths and injuries.

In Indonesia, a false claim about a Chinese woman denigrating a mosque went viral in 24 hours, and brought out angry mobs that ransacked and destroyed 14 Buddhist temples.

These falsehoods are distinct from criticisms, opinions and viewpoints, which are not covered by the law, said Mr Shanmugam.

"Facts which are false are very easy to identify, false or true. And that is what this (Bill) covers," the minister added.

He said people can continue to criticise the Government and express their views on politics and current affairs without fearing that they will run afoul of the proposed law.

For instance, saying "the Government is to be blamed for rising inequality", "human rights in Singapore is being curtailed" and "the Government is not giving back my CPF (savings)" will not attract any punishments or sanctions under the law.

"All of those are opinions, and it doesn't get caught by this Bill," said Mr Shanmugam.

He added that the Bill relates primarily to people who "put out falsehoods to create mayhem, to create trouble, to create anger and hopefully violence".

"So, it is completely not true to say... all sorts of opinions will be caught or free speech will be affected or I cannot express viewpoints. Nor is it true to say the Government is going to decide what I can say, what I cannot say," said Mr Shanmugam, acknowledging that the Government has to explain these aspects of the Bill more clearly.

What is covered and what is not

The Protection from Online Falsehoods and Manipulation Bill covers statements of fact that are false or misleading, and not opinions, criticism, satire or parody. Below are some examples.

Statements of fact that are false

• The Government has declared war against Singapore's neighbours.

• Sentosa will, in 10 years, be developed into a private theme park for millionaires only.

• The Government is applying double standards and being hypocritical.

• The Government must take responsibility for the inequality that is now Singapore's biggest problem.

• Recent lapses point to deeper problems in the Government. When will there be genuine accountability?

• Recent lapses by the Government show that standards are slipping.

• The Government is not giving back my Central Provident Fund money.

• The cost of living is rising.

• HDB prices are too high.

• Certificate of entitlement prices are too high.

• Human rights in Singapore are being curtailed.

• We can't hold a protest in Singapore.

• Satire is the use of humour, ridicule, irony or exaggeration to make fun of or expose and criticise a person or an organisation.

• Examples of satire include comics that convey the illustrator's take on political issues or events.

• Parody is a form of satire that imitates the characteristic style of a particular individual or genre, using deliberate exaggeration for comic effect.

• Examples of parody include television shows here with characters that imitate MPs and ministers.