SINGAPORE - Singapore should consider a hybrid system where the president is not fully elected, suggested lawyer Ronald Wong.

Instead, the president should be selected from among the six members of the Council of Presidential Advisers (CPA) through an internal vote.

Mr Wong, 28, said the CPA will work as one unit in this proposed system to safeguard Singapore's reserves. The member appointed president will then take on the ceremonial and diplomatic functions of the role.

Singaporeans will have some hand in selecting their president, he added, as two members of the council must be elected by voters. 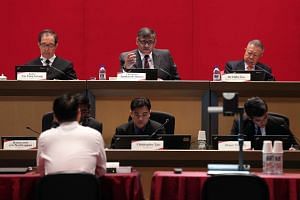 But Far East Organization chief executive officer Philip Ng, a member of the Constitutional Commission, said there was a chance these two elected members may not become president in the council's internal election. He asked if this would frustrate Singaporeans who have elected them.

To this, Mr Wong said would not be able to discern the sentiments of Singaporean, but he added that the council would function as one institution.

Chief Justice Sundaresh Menon, who chairs the commission, noted that it this would require a fundamental redesign of the presidency, and asked Mr Wong what he hoped to achieve through the change.

Mr Wing said he envisioned that his proposed system will help ensure at least some minority representation, while also beefing up the CPA and giving it more powers to check the president.