SINGAPORE - Local religious groups say proposed changes to the Maintenance of Religious Harmony Act (MRHA) are a much-needed update to the 30-year-old law, especially since hate speech can spread like wildfire in the age of social media.

These amendments also mean that external forces with divisive intentions will not be able to take root here, they add.

The new Bill introduced in Parliament on Monday (Sept 2) would - if passed - allow the Government to act swiftly against threats to religious harmony and curb foreign influences in local religious organisations.

It would require religious groups to ensure its key leaders are Singaporeans or PRs, and declare single donations of $10,000 or more if they come from foreigners, among other things.

It would also mean that restraining orders issued under the MRHA take effect immediately. Currently, the Government has to serve a 14-day notice before the order takes effect.

Venerable Kwang Phing, who is president of the Singapore Buddhist Federation, said foreigners could use the Internet as a tool to recruit Singaporeans to their religious causes.

Those involved in religious conflicts overseas will try to find their sympathisers here, he noted. "Therefore, updating the MRHA and intensified public education programmes are important measures to ensure long-lasting peace and harmony here." 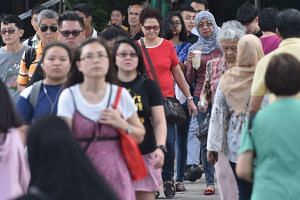 Changes proposed to Maintenance of Religious Harmony Act: 5 things to know about the law

Offensive speech can become hate speech if normalised and not dealt with, says Shanmugam

Singapore prepared to 'err on the side of caution' to preserve racial harmony, says Shanmugam

In a joint statement, the Hindu Endowments Board and Hindu Advisory Board said religious harmony is something that Singaporeans work hard to sustain.

"Maintaining religious harmony requires constant attention and focus to ensure internal or external forces, with divisive intentions and an agenda to create disharmony, do not take root here," he said.

A spokesman for the National Council of Churches of Singapore said the proposed changes "hold religious leaders to a higher standard of conduct and greater accountability".

"These measures will also encourage religious communities and their leaders to practise good governance and to be more alert to the influence of foreign sources that have the potential to sow seeds of distrust and conflict," he said.

The Bill also introduces the Community Remedial Initiative, which gives a person the opportunity to better understand the feelings of a religious group he has offended.

Such a person could be asked to make a public or private apology, or participate in activities with that group.

The Islamic Religious Council of Singapore (Muis) said mosques here have initiatives to strengthen ties with other faith communities and improve inter-faith understanding.

Islamic religious teachers also abide by an ethics code so that they can give the community advice suited to Singapore's context, a Muis spokesman added.

"We hope that the ground-up efforts by religious communities in Singapore, together with a clear set of laws to protect religious harmony, will strengthen mutual understanding and peaceful coexistence in our religiously diverse society," the spokesman said.

The Home Affairs Ministry (MHA) said it also discussed the issue with other religious groups, including the Catholics, Taoists and Sikhs, since early this year.

"All of them agree on the need to update the MRHA and support the amendments. They have also provided constructive feedback, much of which MHA has incorporated into the Bill," it said.