SINGAPORE - The spat between the People's Action Party (PAP) and Singapore Democratic Party (SDP) over renewal plans in Bukit Batok has rumbled on, with the former issuing another statement early Thursday (April 28) to rebut comments made by SDP chief Chee Soon Juan.

According to the PAP statement, Dr Chee - in a doorstop interview with the media after being confirmed as a candidate for the Bukit Batok by-election on Nomination Day on Wednesday - had repeated SDP's "basic misunderstanding" over the role of Town Councils.

"Commenting on the proposed Neighbourhood Renewal Programme (NRP) that was launched by the Jurong-Clementi Town Council last Sunday, he (Dr Chee) claimed that it was the URA (Urban Redevelopment Authority) that would develop such projects, and the MP and hence Town Council was there only to push for the projects," the statement said. 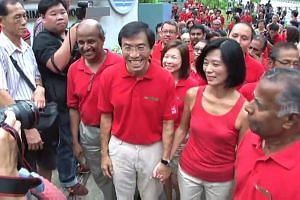 The PAP clarified in its statement that while the URA is in charge of putting together a national Masterplan to guide the overall development of land in Singapore, it neither initiates NRPs nor is responsible for their implementation.

"The Government funds approved NRPs after they are proposed by Town Councils," PAP said. "And the Town Councils are responsible for implementing the NRPs, from start to finish.

"This means the Town Councils are responsible for prioritising needs within all the estates under their charge, developing detailed plans in consultation with residents, awarding tenders responsibly, overseeing the contractors and finally ensuring maintenance of estate enhancements. The PAP's candidate for the by-election, lawyer Murali Pillai, had first attracted criticism from the SDP after unveiling $1.9 million worth of infrastructure plans by the Jurong-Clementi Town Council.

The plans, which come under the NRP, include building covered walkways and a park for a neighbourhood in the single-member constituency. 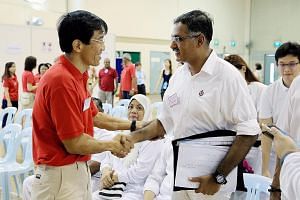 That comment was met with a SDP statement on Tuesday (April 26) that said govenment agencies were non-partisan and would work with whoever is elected as MP for Bukit Batok.

The SDP also suggested that what Mr Murali had said was unethical and could even be in breach of the law, which drew a rebuttal from the PAP stating that the SDP's statement was "misconceived" and "absurd".

The sparring spilled over on Nomination Day when Dr Chee, 53, criticised Mr Murali's upgrading promises as a "knee-jerk reaction every time an election comes".

He also called for an update on the $24 million upgrading plan that former MP David Ong had announced in last year's general election.