SINGAPORE - This May Day is not a happy one for workers as they are "worried sick" about their jobs in this uncertain economy, Singapore Democratic Party (SDP) chief Chee Soon Juan said on Sunday (May 1).

He reiterated his call for retrenchment insurance and gave details of how such a scheme would work.

Workers pay a fee to be included in the system, and if retrenched they get 75 per cent of their last drawn salary for the first six months without a job. They then get 50 per cent for the next six months, and 25 per cent the six months after.

This will give them peace of mind while they look for a new job as bills will still have to be paid even as their income stops, he argued. 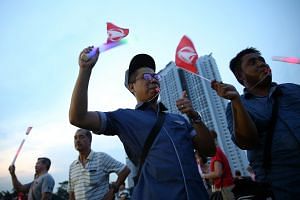 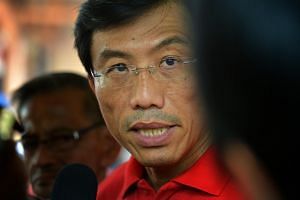 Bukit Batok by-election: SDP says character should not be an election issue 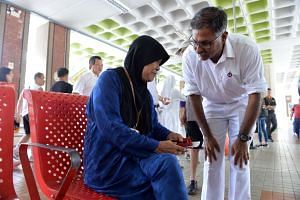 Dr Chee, who is contesting the Bukit Batok by-election to be held on May 7, was speaking to reporters after a morning walkabout in Bukit Batok that ended at the coffee shops at Block 154 Bukit Batok Ave 6.

There, the SDP crossed paths with the People's Action Party's (PAP) team that included his opponent Murali Pillai and some of the MPs from neighbouring Jurong GRC.

Dr Chee also criticised MPs for holding Meet-the-People sessions just once a week, saying that this caused residents to wait more than an hour to have their cases heard.

But he did not cite how many sessions ought to be conducted, and said the number should be adjusted according to demand.

The SDP will hold a rally tonight (May 1) at Bukit Gombak Stadium. Dr Chee said he will address Prime Minister Lee Hsien Loong's criticism of him then.

Dr Chee also repeated his pledge to be a full-time MP if elected, and again said it is not "humanly possible" to juggle the myriad obligations of an MP to the residents and a full-time job.

On Saturday, Mr Lee raised questions about Dr Chee's character and whether it made him a suitable MP. Among other things, he pointed to how Dr Chee was "completely hypocritical" during his party's rally on Friday.

After several SDP members had hit out at former Bukit Batok MP David Ong, who resigned over an alleged affair, the SDP chief came on stage and said it was not his style to kick a man when he is down.

He also noted that Dr Chee said in a recent newspaper interview that he was not sorry for anything he had done in the past. Yet he was presenting himself as a changed man, Mr Lee said.