SINGAPORE - People's Action Party (PAP) candidate Murali Pillai said on May Day that one aspect of his plans for Bukit Batok constituency, if he is elected, is to help residents out of work get jobs.

To do this, he will tap on the network and contacts of people in the community to match retrenched workers to potential jobs, so that those who have been laid off can find employment again.

This job placement programme can "make a difference to a number of Bukit Batok residents who are affected by the gloomy economic climate", he added.

Mr Murali was elaborating on a job placement scheme he had earlier announced as part of his manifesto, after visiting bus drivers at Bukit Batok bus interchange on Sunday (May 1).

The programme, he said, "entails leveraging on community contacts within the pool of community volunteers and Bukit Batok residents, and also my own business contacts." 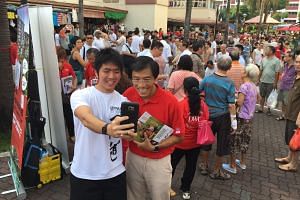 Mr Murali, 48, said he has piloted the programme on an informal basis.

He told reporters that on a recent walkabout in the area, he came across a 66-year-old man, Mr Razali, who was retired, but was still fit and willing to work.

"Thankfully, I managed to get two offers for him. He went for the interviews and he is considering them. I hope he will be able to choose one of them," he said.

In another case, Mr Murali said he had introduced an outof-job woman, known as Ms Ng, to a mentor who could help her take on a new skill to move on to another industry. The mentor runs a skills competency course in Singapore Management University.

"It's never easy to move from one industry to another," he said. "It involves a little level of persuasion as well. I'm glad that Ms Ng has agreed to take up this course."

Mr Murali declined to respond to the ongoing debate between the PAP and the Singapore Democratic Party (SDP) on the character of a political candidate and said he wanted to focus on the workers, in keeping with the spirit of May Day.

But asked for his assessment of the political campaign thus far, Mr Murali said: "My assessment has not changed. It is a tough fight - the by-election effect is real.

"Every day, I need to do what I need to do - to persuade Bukit Batok residents of the plans I have for them and seek their support," he added.