SINGAPORE - The People's Action Party (PAP) and Singapore Democratic Party (SDP) on Sunday (May 1) continued to spar over the issue of whether character should matter in evaluating election candidates.

Finance Minister Heng Swee Keat said SDP's argument that the character of election candidates should be off limits, "has to be one of the most astounding statements ever made in the history of Singapore politics".

Dr Chee also highlighted that he had "ample opportunity" to launch "a very potent attack" on Prime Minister Lee Hsien Loong over his sister, Dr Lee Wei Ling's recent statements, but refrained from doing so as he did not believe in making personal attacks.

She had alleged that Mr Lee had abused his power for his own political ends, by going overboard with commemorations for their father's death anniversary.

The issue of character came into focus after Mr Lee said on Saturday that Dr Chee's character had not changed. 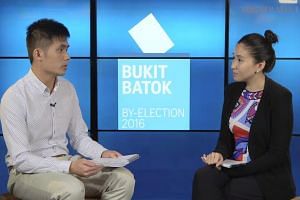 He pointed to how the opposition leader had been "completely hypocritical" at a rally last Friday, saying he would not kick a person who is down but yet allowed SDP members to do just that. 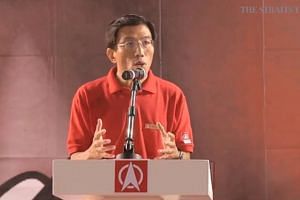 Mr Lee, who is PAP secretary-general, also said character goes to the heart of a candidate's fitness for public office. "Is he honest? Does he have integrity? Is he loyal? Is he committed to serve the people? What are his basic motivations? These come first, before we even talk about how able he is, what experience he brings, or what policies he proposes," he had said.

Mr Tambyah, responding on Saturday, had said "a person is not defined by his or her own actions or words".

On Sunday, Mr Heng said in a Facebook post: "This means a person can lie, cheat or betray someone with impunity."

"Prof Tambyah and his colleagues believe character doesn't matter, a person's words are irrelevant, and we should ignore their actions. They believe they should be allowed to do or say anything and not be held responsible for their actions or words," said Mr Heng, who is a member of the PAP central executive committee and alternate chairman of the PAP headquarters' executive committee.

"How are voters to believe what such politicians say or hold them accountable for their actions if they were running a town council?" he asked.

Responding on Sunday night after eight speakers at his party's rally had vouched for his character, Dr Chee charged that PAP leaders had sunk to a "new low" by questioning his character.

He said he would not engage in personal attacks, and had never brought up what Mr Lee's sister had said until last night.

"I had ample opportunity to attack him on this but I did not. And it would have been a very potent attack because this is not your political opponent saying it. It is your own flesh and blood making these statements about you," he said. "I refrain from using Dr Lee Wei Ling's dispute with her brother because that's not the kind of politics that I want to engage in."

He added if the tables were turned, PAP and the news outlets would have gone to town with the news.

Dr Tambyah, who spoke before Dr Chee, said: "We could have used Dr Lee's published allegations to expose the hypocrisy of the Prime Minister's statements on character but we will not."

On Mr Heng's comments, he said "a person is not solely defined by his or her actions and words although they often do reflect his or her values".

He also referred to Mr Lee's remarks on Saturday that anyone standing for public office should be prepared to have his past actions examined transparently and honestly.

Mr Lee had said that this is so "voters can make informed, responsible decisions as to who is fit and best qualified to represent them".

Dr Tambyah said on Sunday that he welcomed the opportunity to examine "all the assets of the PAP ministers and MPs".

"Of course with the current leak of the Panama Papers and other related documents, the Prime Minister may get his wish sooner than he expected," he said referring to the recent leak of 11.5 million documents of the Panamanian law firm Mossack that exposed shady offshore financial dealings.