SINGAPORE - Voters in Bukit Batok should ask three questions as they consider who to cast their ballot for on May 7, People's Action Party (PAP) MPs said on Friday (April 29) night at the party's first rally of the by-election campaign.

First, what kind of person is the candidate?

Second, what promises has he made?

And third, can he deliver on them?

Ms Grace Fu and Madam Halimah Yacob laid out the criteria in speeches at the rally at Bukit Gombak stadium as they compared and contrasted between PAP candidate Murali Pillai and the Singapore Democratic Party's Chee Soon Juan.

They held up Mr Murali's 16-year track record of volunteer work in Bukit Batok as proof that he was a sincere, humble and committed man.

"It's not easy to find a photograph of Murali in our Bukit Batok community events because he's not one to hog the limelight," said Ms Fu, the MP for the neighbouring constituency of Yuhua, which comes under the Jurong-Clementi Town Council.

"He's always working quietly behind the scenes, always about serving others and not himself," added Ms Fu, who is Minister for Culture, Community and Youth.

Madam Halimah, an MP for Marsiling-Yew Tee GRC and the Speaker of Parliament, also vouched for Mr Murali's character at the two-hour rally . "His character has not changed," she said, recalling her time working with him in Jurong GRC - he as a branch activist, she as a MP there.

"He is like the paddy stalk, the fuller it is, the more it bows, not like the lallang, standing tall but swaying from right to left depending with the wind," she said in a Malay speech.

Ms Fu told the crowd that when the PAP asked its branch activists in Bukit Batok for a suitable candidate to replace Mr David Ong who resigned, Mr Murali's name was first raised - by a Chinese activist. This showed that hard work trumped racial differences, she said. 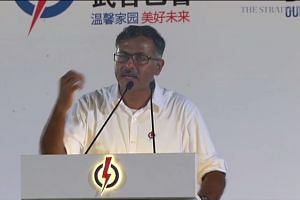 "Being of minority race is not an issue when you're of good character and people know you're sincere in wanting to help. And when you have a strong team of people who can help bridge the language gap when you meet residents." 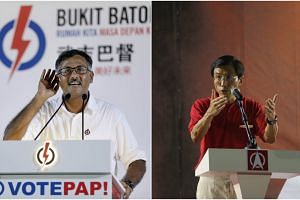 But she cautioned the crowd: "Beware of anyone who plays the racial card, asking Chinese residents to vote for Chinese only. We know some people have gone around saying this. I hope this is not the position taken by SDP and hope they will clarify 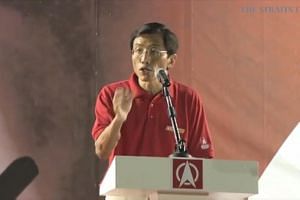 As for the candidates' campaign promises, both Ms Fu and Madam Halimah said that Mr Murali has drawn up plans for a

Dr Chee has promised to run the town council well and run social programmes including financial advice to the needy and community support for the elderly and low-income.

While both sets of programmes sound good, the two men have very different track records, they said.

Dr Chee has not held a steady job for many years, said Ms Fu.

"Let me be clear. I'm not criticising his position to not hold a full-time job for so long. That is his personal choice. But the work experience, or the lack of it, is a relevant fact when we consider the credentials of the candidate," she said.

Voters should also look at the resumes of each candidate and seek references from their colleagues and bosses, added Ms Fu."Will there be a referral letter from Mr Chiam See Tong? You know, the sifu (mentor) who recruited him into the SDP. And what will Mr Chiam write about him?"

She was referring to Dr Chee's clash with Mr Chiam, who set up the SDP but left it in 1996 following a dispute with party leaders shortly after Dr Chee joined the party.

Both Ms Fu and Madam Halimah also cited the incident when Dr Chee shouted remarks at then-prime minister Goh Chok Tong when they met at a hawker centre in the run-up to the 2001 general election.

Madam Halimah, who was a rookie candidate then, recounted that it was "one of the most shocking experiences" because "whatever party we're from, we must respect our prime minister".

Both speakers also argued that Mr Murali would do a better job of running the town council, and doubted that the task was as easy as Mr Chee made it out to be. "I worry that the SDP does not fully understand the complexity of the task. In some other constituency, the task of setting up has consumed management's attention for many years," said Ms Fu.

In contrast, should Mr Murali be elected, Bukit Batok would be run by the established Jurong-Clementi Town Council. "It will function from day one. There will be no disruption to the town council operations, no need to transfer sinking fund to another town council, no need to set up a new system," said Ms Fu.