SINGAPORE - The work of building Singapore is not done, and bold, creative planning will allow the heartland to be remade, communities to be rejuvenated and the country to be re-imagined, said Prime Minister Lee Hsien Loong on Wednesday (Aug 8).

In his annual National Day Message, Mr Lee held up the Kampung Admiralty retirement community as an example of what the Government is doing to transform education, healthcare and housing to improve lives.

These are the three key areas that worry people when they express concern over the cost of living, he said in the message recorded at Kampung Admiralty.

"In Singapore, we ensure that these key public services are both of high quality and affordable for all Singaporeans, rich or poor. This is how we have helped families to manage their cost of living, and given an extra hand to those who need it. For more than five decades, this approach has worked well," he said.

He added: "We are not done building Singapore yet. By planning boldly and creatively, we can re-imagine Singapore, remake our heartlands and rejuvenate our communities."

Kampung Admiralty, which is in Woodlands, is Singapore's first retirement community and took in its first residents in August last year. The 11-storey complex comprises public housing for seniors integrated with healthcare, wellness and eldercare facilities.

Mr Lee described it as a "high-rise kampung where residents are out and about, socialising with family, friends, and neighbours, and yet never too far from home".

Residents are mostly older Singaporeans with adult children living nearby, and they pitch in to take care of the grandchildren.

Education, healthcare, and housing policies come together for the residents in a "tangible and holistic way", he said.

The childcare centre is one of many that have opened across Singapore in the past few years to increase the number of pre-school places so all children are offered the same opportunities to have a good start in life. 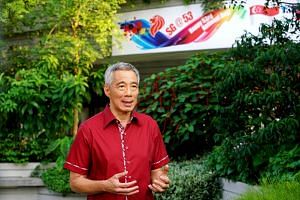 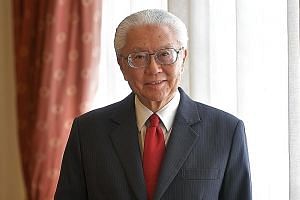 The medical centre, meanwhile, is one of many new upcoming community healthcare facilities which will bring quality care to people where they live. "These services will always be affordable," Mr Lee assured.

While Kampung Admiralty is a model for future public housing, the Housing Board will also continue to maintain and upgrade existing housing estates, he said.

Alluding to the hotly discussed issue of the fate of HDB flats when their 99-year leases run out, he said: "Though the leases still have many years to run, we should think ahead about how we can keep older estates in good living condition, and also start to redevelop them, in order to build new homes and towns for future generations."

Turning to world events, he cautioned about clouds on the horizon.

With trade tensions between major economies worsening over the past year, international trade, investments and business confidence have been affected, and Singapore's growth and prosperity will be affected too, he said.

This could, in turn, affect regional and international security, with one such pressing issue being the situation on the Korean Peninsula, he added.

He said tensions on the Korean Peninsula had eased after Singapore successfully hosted the summit between United States President Donald Trump and North Korean leader Kim Jong Un two months ago. "But there are many challenges still to be overcome before denuclearisation and peace are achieved on the Korean Peninsula," he said.

Closer to home, Malaysia has a new government and Indonesia will hold Presidential elections next year. "We will strive for good relations with Malaysia, based on mutual benefit and respect," he said. "We will continue to work with Indonesia to further our wide-ranging cooperation with them."

Unlike in previous National Day messages, Mr Lee did not mention the economy's forecast growth figures for the year. But he noted that the economy has continued to grow steadily, around 3 to 3.5 per cent in recent years.

Wrapping up, he said: "The work of building Singapore for the next 50 years will be a massive, long-term undertaking, lasting more than a generation.

"To sustain this project, we will need a strong economy and sound government finances. Most importantly, we need social cohesion, political stability, and good government for many years to come, in order to carry out and realise our vision."