While the tax hike on diesel has affected businesses and cabbies, the move will help discourage usage of the fuel and create a better and healthier living environment, said Senior Parliamentary Secretary for Transport Baey Yam Keng.

To do so, the Government is also promoting commuting modes such as car-sharing, trains and personal mobility devices, managing vehicle growth and usage, and encouraging the adoption of cleaner and more carbon-efficient vehicles, he said.

Finance Minister Heng Swee Keat had announced a doubling in excise duty on diesel fuel from 10 cents a litre to 20 cents last week. This took effect from Feb 18.

Yesterday, Ms Lee pointed out that no lead time or grace period was given, and many service providers which use diesel vehicles have lost money overnight. She called for ComfortDelGro, the largest taxi operator here, to at least absorb part of the diesel tax hike.

Meanwhile, Mr Gan said certain heavy machinery and special purpose vehicles have no diesel alternatives in the market, and appealed for firms and operators using them to be exempted from the hike.

In his speech, Mr Baey listed several ways in which the Government is helping to cushion the impact of the diesel tax increase. 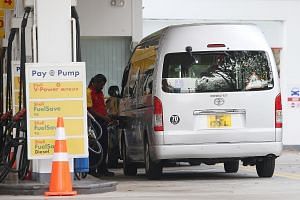 Diesel duty at pumps doubles to 20 cents per litre

Diesel duty hike will filter down to some consumers: Industry

The annual special tax for taxis has been reduced by $850, and Mr Baey said he was glad that all taxi operators have pledged to pass on the entire savings to cabbies in the form of rental reductions and, for some, Medisave top-ups.

ComfortDelGro cabbies driving a diesel taxi that is five years or older can get a $100 voucher if they convert to a hybrid taxi by the end of next month, he added, urging other taxi operators to offer similar incentives and more non-diesel options.

On concerns from parents about school bus fares, Mr Baey said the Government is helping operators through a new road tax rebate scheme for all diesel buses, for a three-year period from August.

But the National Taxi Association's executive adviser added that rebates like the $100 voucher from ComfortDelGro offer only slight reprieve to taxi drivers, as the daily rental rate for a hybrid taxi is $120, compared with $100 for a diesel taxi.

"Taxi firms should look into lowering the rental rates. If not, cabbies may not switch to hybrid taxis, and instead clock longer hours and distances on their diesel cabs to cover the higher diesel rates.

"This runs contrary to the intention of the tax hike," Mr Ang said.