Auxiliary police officers and public servants, as well as retired officers from the Singapore Civil Defence Force (SCDF) and the Singapore Police Force, may soon be authorised to conduct routine fire safety inspections and enforcement.

Aiming at freeing up resources for the SCDF to focus on higher-risk areas, the move was one of the key changes proposed in the Fire Safety (Amendment) Bill that was tabled in Parliament yesterday.

According to figures provided by the Ministry of Home Affairs, the SCDF conducts about 10,000 inspections annually, which include scheduled checks as well as ad hoc ones, which are based on public feedback.

The authorised third parties would ease about half of the roughly 4,500 ad hoc inspections that the SCDF conducts yearly.

The scope of inspection and enforcement for these third-party officers would be limited to straightforward non-compliance cases and minor offences, such as obstructions along escape routes.

In addition, only officers with relevant experience will be selected for such roles, and the SCDF will manage their training and evaluation.

When carrying out inspections, these officers will be required to wear body cameras. The SCDF will also conduct random audits on their operations as a safeguard. 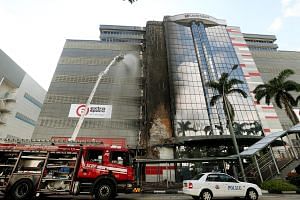 These operators currently act as an additional layer of checks and safeguards between the SCDF and high-risk buildings, which are required to connect their electrical fire alarm systems to the SCDF Operations Centre.

When the fire alarm at these buildings is activated, these operators are required to verify the alarm before notifying the SCDF, which will then dispatch resources to the location.

The proposed licensing regime would create offences for serious non-compliance cases such as failure to verify fire alarms, and impose fees for unverified calls by these operators to the SCDF.

A spokesman for the SCDF said there are currently seven fire alarm operators.

When asked for details of non-compliance by the operators, the spokesman said incidents have not been officially recorded thus far as the licensing framework will come into effect only after the Bill is passed in Parliament.