SINGAPORE - Asean can weather the ongoing drastic changes in the global environment if its members strike the right balance between promoting their national interests and staying united as a grouping, Foreign Minister Vivian Balakrishnan has said.

Storm clouds are gathering, he said in his opening remarks at the Asean Foreign Ministers' Meeting (AMM) on Thursday (Aug 2), as he sketched out the grim raft of challenges.

Veteran American diplomat Henry Kissinger had declared this a "very, very grave period for the world", said Dr Balakrishnan, noting the emergence of a multi-polar world, trade wars, and waves of disruption caused by the digital revolution.

This is why Singapore, in its term as Asean chair, is pushing for a "resilient and innovative" Asean, the minister said.

And while the regional grouping has made great strides since its formation, it must stay the course and remain united as challenges loom, he added.

"And if we can find this balance, then we can make common cause and despite the fact that this may be a very, very grave period, we should also be in a position to seize the many opportunities that lie ahead of us."

The 51-year-old regional grouping must remain anchored to the core principles of Asean unity and centrality, maintain an open, inclusive and rules-based regional architecture, and double down on community-building efforts while enhancing cooperation in newer areas including smart cities and e-commerce, he added. 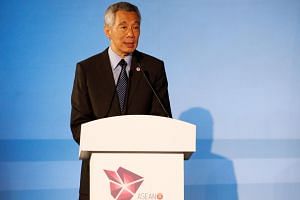 "And Asean has to remain a testament to the benefits of free trade and economic integration," said Dr Balakrishnan, citing the importance of the Regional Comprehensive Economic Partnership (RCEP) which members hope can be concluded by the end of this year.

"In fact, free trade and economic integration has been a recipe for peace and prosperity in South-east Asia over the last five to seven decades."

But Asean cannot go at it alone, he added. It must continue to work with its external partners through Asean-led mechanisms.

Key partners, including China, Japan, South Korea and the United States, are in town for a marathon week of annual meetings, culminating in the East Asia Summit foreign ministers' meeting and Asean Regional Forum retreat on Saturday.

Dr Balakrishnan said he was confident that discussions over the coming days will yield meaningful outcomes, citing some of the collaborations in the works, such as the cyber security-related Asean Regional Forum workshop Singapore plans to host later this year.

The Asean Plus Three - Asean member states with China, Japan and South Korea - is also exploring a statement on cooperation against anti-microbial resistance, and the East Asia Summit is negotiating a range of statements on topics such as cyber security, smart cities and counter-terrorism, he added.

In his opening remarks at the AMM Plenary Session later in the morning, Dr Balakrishnan reiterated the need for Asean to maintain its composure and ability to cope with major tectonic shifts.

"We are already making steady progress and we'll use this session to assess what else we need to do and how urgently we need to progress in order to give reality to our leaders' vision," he added.

He noted that the region was recently struck by disaster - the collapse of the Xe Pien-Xe Namnoy hydroelectric dam in Laos and the Lombok earthquake in Indonesia - but also saw a miracle that captivated the world: the dramatic rescue of the young soccer team that got stranded in a cave in northern Thailand.

"The whole world was watching and praying, and I think we were all ecstatic when the rescue was made," he said, turning to Thai Foreign Minister Don Pramudwinai. "It also showed the bravery of the boys, the resilience and the unity of the team, the way you were able to engage and work with the international community as well, and the sacrifice and bravery of the Navy seals. So we congratulate Thailand for that."