SINGAPORE - As Singapore charts an uncertain future, workers face a difficult transition to cope with changes in their industries and to remain employable.

Prime Minister Lee Hsien Loong assured such vulnerable workers on Tuesday (Oct 15) at the NTUC National Delegates' Conference that the Government will stand by them and ensure their well-being.

He pointed out that in many other parts of the world, there was deep-rooted unhappiness as workers who lost jobs were left to fend for themselves and those who still had jobs felt left behind by progress.

This had given birth to populist movements elsewhere - dividing societies and fracturing the social compact - as well as demonstrations, and Singapore was not immune to the forces that were tearing these countries apart.

He noted that in recent months, people have been watching the Hong Kong protests closely. While the most vocal complaints are political, there is also the sense that serious economic and social concerns have not been addressed, he said.

Housing there is very expensive, it is difficult to start families, and the younger generation are not optimistic about their future, no matter how hard they study or work.

Although Singapore’s situation is quite different from Hong Kong's, the same deep angst and social division can happen here, he said.

"If this does happen to us, we will suffer the same consequences as them, only worse, because we are that much more vulnerable," said PM Lee. "It will become impossible to govern Singapore, to make and carry out difficult decisions, or to plan for the long-term good of the nation."

PM Lee added that such circumstances would destroy confidence in Singapore. "Singapore will be finished," he said.

The symbiotic relationship between the ruling People's Action Party and the National Trades Union Congress can help Singapore avoid this dire outcome, said PM Lee, stressing that the party will remain close to its roots in the labour movement.

This is why the PAP government works to build affordable homes, and provide quality healthcare, education and public transport, as well as create jobs for workers, Mr Lee said.

"This is far better than having a populist government that gives vent to the frustrations of the population, or panders to short-term passions at the expense of long-term interests."

Meanwhile, the labour movement has been an equal and constructive partner, he added.

"Workers have enjoyed a fair share of the fruits of your effort," he told the audience. "You have influence and interests within the system. You do not have to go outside it, work around it, or worse, try to pull down and replace it. This is your system."

The Prime Minister outlined how, in the 1960s, the PAP passed legislation that significantly curtailed the bargaining power of unions. At the time, unions found these changes difficult to accept.

"But the choice was between adapting to the new realities and becoming irrelevant," he said.

It was at the NTUC's Modernisation Seminar 50 years ago that pioneer PAP leaders spoke to unionists, forging a new compact that would mark a turning point in the relationship between the Government and unions.

The leaders argued that unions had to take a broader perspective on workers' interests, not narrowly defined by immediate wage rises or job security, but by the more holistic goal of helping them achieve a better standard of living. 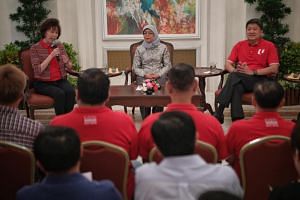 NTUC network to ramp up efforts to unionise SMEs

NTUC also expanded its role into the social sphere, and set up cooperatives like Income and FairPrice to provide life insurance to workers, and necessities like food and groceries at affordable prices to them and their families.

From then on, NTUC no longer saw itself as just an institution for collective bargaining, but a partner in Singapore's economic and social transformation, PM Lee said.

In the various economic downturns to follow, tripartite relations were "severely tested". But the Government and labour movement tackled problems together, renewing their close bonds into succeeding generations, he added.

PM Lee noted that many industries are going through a transition, and that the Government must help workers handle this transition properly.

"To train for new roles, to cope with the rapid changes in their industries, and to remain employable," he said. "It will not be easy, but rest assured we will walk with you all the way."

In a separate speech, NTUC president Mary Liew said the labour movement must continue to offer members protection, "to safeguard them against possible exploitation by errant employers or displacement due to macroeconomic factors", along with privileges, training and employability help.

It should also use digital technology to better serve workers and their families at all life stages.

This comes as geopolitical tensions have led to uncertainties around the world, affecting Singapore’s companies, industries and employment. Many companies are cautious in their expansion, while some have moved to shorter work-weeks, Ms Liew noted.

It is important for NTUC and workers to stay united and press forward with transformation as a team, she said.

She added that the labour movement must also transform and adapt as the workforce profile changes to include more professionals, managers and executives as well as older workers.

THE BIG STORY: PM Lee: Workers will not be left behind | The Straits Times

NTUC members also have changing needs - such as looking after both elderly parents and children, or looking at their career after reaching a certain level of seniority.

With union leaders on the ground who understand workers' concerns and aspirations, the NTUC, Government and employers can help workers, companies and Singapore succeed, said Ms Liew.

"This strong tripartite relationship that is based on trust must continue to be our unique hallmark," she said.