SINGAPORE - Officers from the National Environment Agency (NEA) will be able to enter smoking-prohibited places without warrants to investigate smoking violations, and it will be illegal to obstruct or prevent them from collecting evidence.

In addition, it will be illegal to verbally or physically abuse an officer, and to mislead or withhold identification from them.

In presenting the amendments to the Smoking (Prohibition in Certain Places) Act, which were passed on Monday (Sept 10), Senior Minister of State for Health Amy Khor said these increased powers were needed to ensure that NEA could effectively maintain Singapore's smoking bans.

Dr Khor said: "Currently, to investigate complaints about smoking violations, NEA enters and inspects the premises with the manager's consent. While most have been cooperative, some managers have hindered investigations by denying NEA's authorised officers entry into their premises, which prevents timely, effective investigation and enforcement."

She also said Orchard Road would be the only geographical area in Singapore marked as a smoke-free zone for now. Only after assessing its success will the authorities decide if it is worth expanding the concept to other parts of the country.

Seven Members of Parliament spoke in favour of the Bill, though all of them urged the Government to take stronger action against smokers in residential flats whose second-hand smoke affected their neighbours.

Nee Soon GRC MP Louis Ng said: "It would seem at odds to protect people from second-hand smoke in the public areas where they spend less time and not protect them at home where they spend more time."

Fengshan MP Cheryl Chan gave the example of how one of her residents was affected by neighbours chain-smoking in the corridors, forcing her to turn her air-conditioning on for the sake of her young toddlers. 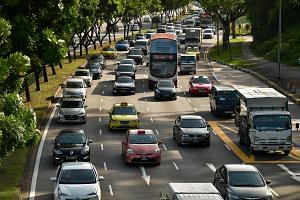 More getting caught for smoking in public service vehicles

Cameras to be deployed across island to detect illegal smoking

Tanjong Pagar GRC MP Joan Pereira suggested making it illegal for smoke to drift out of one's home, saying: "They should not be standing near the windows, doors or corridors to smoke. If smoke is detected outside of the flat, the resident should then be considered to have violated the law."

In response, Dr Khor cautioned against intruding into people's private homes in this realm.

"If we were to prohibit smoking in one's own homes, it would inevitably entail bringing to bear the necessary investigation and enforcement powers," she said. "Such an intrusive regulatory approach to tackling neighbourly issues could ultimately be even more detrimental to community harmony."

Dr Khor said that, in fact, the Government has seen a decrease in reports of second-hand cigarette smoke drifting into other's homes.

Many MPs also raised concerns over how the Bill would be effectively enforced.

Responding, Dr Khor talked about the use of technology such as thermal cameras, for which the Government has called a tender. She also said that friends and family of smokers should fully support them if they are trying to quit.

"Enforcement is necessary but not the silver bullet. Instead, our deeper aim is to foster social norms that promote health and well-being."