But not all the ministers are moving to new ministries, he told Singapore media on Friday (April 20) when asked about the scale of the reshuffle.

"Some of the key ministers, their portfolios will be adjusted, but basically staying in places where they still need time to continue to develop initiatives which they have started," he said.

PM Lee had earlier signalled that he would be making significant changes to Cabinet before Parliament opens on May 7 after a month-long recess, to give younger ministers more exposure and responsibilities.

Analysts and Singaporeans alike have been watching for signs to see which office holders will be moved or promoted.

"Well, I am going home to settle (the reshuffle). We will announce it next week. So it is just a few days of suspense, I hope you'll be able to bear with it," said PM Lee in an interview to wrap up the two-day Commonwealth Heads of Government Meeting in London.

On whether the reshuffle will shed light on who the next prime minister will be, PM Lee said he was confident that the fourth-generation ministers were making headway in choosing a leader.

Describing it as a "continuing process" that takes some time, he said the younger ministers are working together on the agenda for the President's Address, and on tackling problems which come up from time to time. 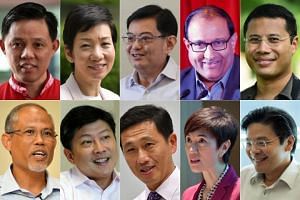 Cabinet reshuffle the next item on Singapore's political calendar 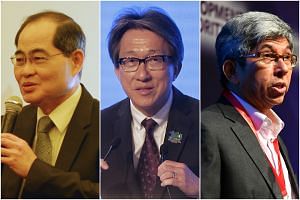 Three veteran ministers expected to step down in Cabinet reshuffle

"I am quite confident that gradually they are beginning to have a sense of one another and who they would like to have to lead them," he added.

The prime minister had tasked the 4G leaders with drafting President Halimah Yacob's inaugural address at the opening of Parliament, which sets out the Government's agenda and policies for the remaining years of its term.

He said this would give Singaporeans a better sense of them and their thoughts.

On Friday, he said he had given the younger ministers advice, and they are now on the 20th draft of the speech.

"I gave them some inputs on where to cast it, where to put the emphasis, how to pitch it. It has gone back and forth....it is an iterative process," he said.

He added that it was important to think through the focus and presentation of the issues, so as to put them across in a coherent and vivid way that people would understand.

"I have been doing these drafts for now 30-odd years and this is the one in which my drafting is the least of all," he said. "Because the younger ministers have put a lot more effort in and it will show."