SINGAPORE - Workers' Party (WP) town councillors followed a set of guidelines to keep a "watchful eye" over their managing agent.

They did not, argued their lawyer Chelva Rajah, give FM Services & Solutions (FMSS) free rein to approve payments to itself, even though its owners How Weng Fan and Danny Loh held key managerial roles in Aljunied-Hougang Town Council (AHTC).

At issue on Wednesday (Oct 10), the fourth day of a multimillion-dollar civil suit to recover alleged excess payments made to FMSS, was whether the WP town councillors had put in proper controls to manage this alleged conflict of interest.

Mr Rajah argued that they did, and thus could not be deemed to have made improper payments.

For example, former WP chief Low Thia Khiang had put in place a standard operating procedure (SOP) in December 2011 detailing the issues a town council might face, such as estate feedback or personnel matters, the relevant person these should be brought up to, and how these would be resolved.

But KPMG executive director Owen Hawkes, the subject of a cross-examination, said the SOP appeared to be little more than a communications proposal.

While issues pertaining to estate management appeared to be more detailed, Mr Hawkes argued that the proposal for administrative or policy matters did not "seem to be very fully thought out".

How these particular issues were handled, he added, was among his key concerns when his firm was tasked to look into AHTC's books after the Auditor-General's Office (AGO) found significant governance lapses in a special audit.

"That's not really an SOP - it's just decisions made by the town council and communicated by the chairman for adoption," he said. 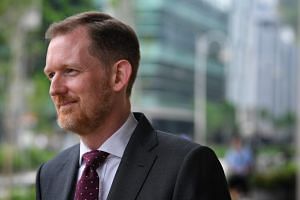 AHTC trial: Spotlight on improper payments and whether they can be recovered

AHTC trial: Invoice of over $106,000 paid to FMSS not improper, says defence

Mr Rajah also sought to establish, through various e-mails, that the WP town councillors checked all the expenses they were signing off on, and did not approve them blindly.

Among other things, he pointed out that then AHTC chairman Sylvia Lim had highlighted FMSS' proposal to spend $11 million on lift maintenance and repairs, noting that the town council "could not afford" to spend that amount yearly.

But Mr Hawkes said she was merely turning down items that were not applicable, and added that this correspondence took place in June 2015, after the AGO report had come out.

"So maybe there's more sensitivity to the issue at this point," he said.

Mr Rajah also took issue with KPMG's suggestion that AHTC deals with its conflict of interest issue by getting an independent member of the town council to approve payments at each stage. He said this was not practical as it would require a huge amount of time.

Mr Rajah argued that the previous town council, when it was led by the People's Action Party before the 2011 General Election, also handled conflicts in a similar way. At the same time, Ms How and Mr Loh had been known by the WP town councillors for many years, and were people who they considered reliable and trustworthy.

Mr Hawkes retorted: "Trust is not a control - it's the enemy of control."

In wrapping up his cross-examination, Mr Rajah noted that of the $33 million paid to FMSS and deemed to be in contention, $1.5 million was deemed by KPMG to be improper. In addition, an extra $2.8 million was paid to architects who were the more expensive of two options.

Mr Rajah argued that even then, his clients disagreed with most of how these judgments were made. The total sum that ought to be recovered would in fact be closer to under $30,000, he said.

Besides Mr Low and Ms Lim, the other defendants in the case are WP chief Pritam Singh, town councillors Kenneth Foo and Chua Zhi Hon, FMSS and its owner, Ms How.

Defence lawyer Leslie Netto was the next to cross examine Mr Hawkes on Wednesday.

Mr Netto, who is representing Ms How and FMSS, disputed KPMG’s calculations that the appointment of FMSS for the first managing agent contract from 2011 to 2012, instead of retaining the previous agent CPG, incurred an additional cost of more than $515,700 for AHTC.

Mr Netto added that the FMSS contract had also included the taking over of all existing staff from Hougang Town Council, in the merger with Aljunied Town Council. This cost $1.1 million for a year.

In comparison, KPMG calculated the additional costs of CPG taking over Hougang division at $687,660, based only on the number of units in the constituency and CPG’s contractual rates. Mr Netto said that if CPG had taken over, it may have had to retrench the staff in the Hougang Town Council. He added that it was the intent of the WP MPs that this should not happen.

Mr Hawkes replied that CPG’s taking over of Hougang may result in a potential loss of jobs, which was “regrettable”. But KPMG’s calculation was a cost calculation and not a social calculation, he added.