About $1.7 billion of the $4.5 billion earmarked for Singapore's future economy road map has been spent as of the end of last year.

This figure was revealed yesterday in a report by a parliamentary committee of MPs tasked with examining government spending.

Of the $1.7 billion, $1.54 billion went to raising the industries' capabilities, while the rest was spent on helping firms access markets and financing transformation projects.

The eight-member Estimates Committee gave this update on the 23 industry transformation maps (ITMs) - one of several observations and recommendations contained in its 45-page report.

Besides the ITMs, the report also examined the funding of Singapore's Smart Nation push and large infrastructure projects such as the future Changi Airport Terminal 5.

Committee chairman Foo Mee Har noted that capability development accounted for around 90 per cent of the funds committed to the ITMs so far. These blueprints aim to foster innovation, boost productivity and develop skills of workers in the respective industries.

The West Coast GRC MP urged the Government to actively transfer best practices learnt from one ITM to another, and said it should also look beyond productivity and manpower in gauging how well the ITMs performed.

"Focus should also be on the impact of ITMs on wage growth and the transformative effects on workers and industries," Ms Foo said.

The panel had also asked the Ministry of Finance (MOF) how much of the Government's spending on infocomm technology (ICT) went to cyber security in its Smart Nation push, which is slated to add 13,000 new professional jobs. The MOF said 8 per cent of the more than $2 billion spent on ICT every year is set aside for cyber security. 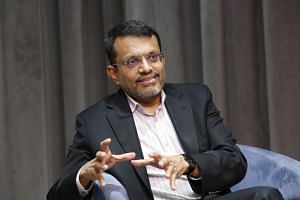 It added that the Government is looking to build a talent pool of 250 specialists in the Government Technology Agency of Singapore (GovTech) and the Cyber Security Agency. GovTech currently has a small team of data science specialists, while more than 4,000 public officers have been trained in basic data science and analytics so far.

The committee said Singapore should not depend on outsourced vendors and consultants to supply technological knowledge.

"It is critical that Singapore develops a strong core of highly competent public-sector officers with cutting-edge expertise in technology, including data science and cyber security," said Ms Foo, adding that the Government should also support the "digitally vulnerable" segments of society.

On large-scale infrastructure projects, the panel queried MOF on the cost breakdown for T5 and the Changi East project, noting that the Government had already sunk more than $9 billion into it.

The MOF expects the entire project to cost tens of billions of dollars, but did not give estimates as it was still in the planning and design phase. T5 is slated to open around 2030.

A majority of the bill will be paid for by the Government, the committee noted, while airport operator Changi Airport Group will commit a substantial portion of its reserves and future surpluses, and is exploring borrowing options. Airport users will pay a levy to fund the airport's development cost.

The committee also quizzed the MOF on the rationale for statutory boards and government-owned companies taking loans to finance such infrastructure projects.

The MOF replied that borrowing for infrastructure projects was not new and helped to preserve the strategic role of the reserves as a crisis fund and an endowment fund to support the annual budget. While there are risks with borrowing, the Government borrowed only when it was financially sustainable.

A version of this article appeared in the print edition of The Straits Times on October 11, 2018, with the headline '$1.7b spent by end-2017 on industry transformation'. Subscribe
Topics:
More
Whatsapp Linkedin FB Messenger Telegram Reddit WeChat Pinterest Print Purchase Article Copy permalink