What was not said is as important as what was said in the signed agreement. The summit’s outcome is not perfect, but was historic in marking what may turn out to be a seismic shift in North-east Asian geopolitics.

SINGAPORE - In the end, there were no surprises.

The Singapore summit was never going to be the disaster that some predicted. Nor were 70 years of hostility ever going to be wiped clean by a single meeting. The summit went pretty much as it was always going to go: as the first step of a process.

The joint statement (JS) signed by US President Donald Trump and North Korean leader Kim Jong Un on Tuesday (June 12) at the end of their morning of talks agreed to "expeditiously" hold follow-up negotiations between US Secretary of State Mike Pompeo and an unspecified "high-level DPRK official" - the Democratic People's Republic of Korea being the official name for North Korea.

This was entirely predictable.

The summit was something less than the "epochal event" that the JS boasted. Its four operative paragraphs, while brief and phrased in general terms, are nevertheless potentially a game changer, though perhaps not in exactly the same way as the two leaders publicly claimed.

Mr Trump deployed more force around the Korean peninsula than the region had seen for some time. His predecessor Barack Obama did little for eight years and called it "strategic patience". As for Mr Trump, bombing Syria while at dinner with Chinese President Xi Jinping was a brilliant stroke that restored the credibility of American power which was grievously eroded when Mr Obama drew a red line but failed to enforce it. Mr Kim surely understood.

After the summit, Mr Trump said that he was freezing joint military exercises with South Korea. But nothing in the JS commits him to drawing down American forces. No one should bet on him not changing his mind on exercises either.

Deterrence having been re-established, it was timely to stabilise it by diplomatic engagement.

Joint Statement of President Donald J. Trump of the United States of America and Chairman Kim Jong Un of the Democratic People’s Republic of Korea at the #SingaporeSummit pic.twitter.com/cSubS9RRJj

The JS commits the two sides to "establish new US-DPRK relations". It is not clear whether this means the establishment of formal diplomatic relations. But even if "new relations" fall short of full diplomatic recognition, this is not an inconsequential shift.

Ever since he stepped up the tempo of missile and nuclear tests, the initiative has been with Mr Kim - not the US or China, and certainly not Japan or South Korea.

Mr Trump deserves credit for seizing the opportunity to level the game when Mr Kim offered an opening. It is now a process of negotiation not reaction of the US reacting to North Korea, and vice versa.

We are only at the very beginning of what will undoubtedly be a long, risky, but potentially extremely significant process. East Asia may be on the cusp of a major strategic shift, comparable to the 1972 US opening to China. But, again, the shift is not exactly what was publicly claimed.

In diplomacy, every word and punctuation matter. The JS consists of three preambular paragraphs, followed by the four points in operative paragraphs, and concludes with another two paragraphs.

The crucial comma in between the two phrases of the sentence fudges the apparent linkage. They could well be read as two separate statements of intent.

In any case, these sentences raise two important questions: What does "complete denuclearisation of the Korean peninsula" really mean; and what do "security guarantees" entail? There is scope for well-nigh endless debate about these terms.

Security guarantees could be incorporated in a peace treaty, a term the JS does not use. Instead, the JS says that the US and DPRK would "join their efforts to build a lasting and stable peace regime on the Korean peninsula". The emphasis of this phrase, and others in the JS, is as much on process as outcome.

A "stable peace regime" is a looser term than a peace treaty, and could be maintained by deterrence rather than a legal instrument. Will North Korea hold its survival hostage to a mere promise from its principal adversary? It is not a certainty that North Korea will give up all its nuclear weapons.

North Korea reacted neuralgically when some Trump administration officials spoke of the "Libya option". A better analogy is the 1994 Budapest Memorandum in which the five permanent members of the United Nations Security Council gave security assurances that guaranteed Ukraine's territorial integrity in return for Kiev giving up the nuclear stockpile it inherited from the Soviet Union.

Pyongyang knows what happened to Crimea. It does not trust any major power. This is hardly surprising, given North Korea's tragic history, deeply ingrained memories of which will not be erased by the JS or personal chemistry between leaders.

But even if the process does not result in "complete, verifiable and irreversible" denuclearisation, building confidence and stabilising deterrence at lower levels of tension are still goals worth pursuing. The JS recognises that "mutual confidence building can promote the denuclearisation of the Korean peninsula". Note, however, that the key word is "can" not "will".

The view from Japan

The process will probably be about arms control rather than denuclearisation. Herein lies a risk, though not one that necessarily will be borne by the US. The key American interest is getting rid of North Korean intercontinental ballistic missiles that directly threaten the US, as was acknowledged by Mr Pompeo a few weeks ago. This leaves Japan vulnerable to shorter-range missiles already developed by Pyongyang. 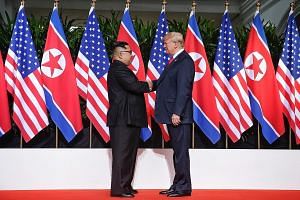 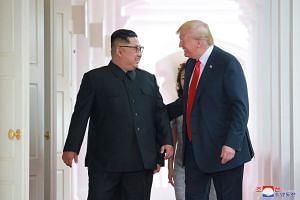 Ever since the Richard Nixon opening to China, Japan has feared being "passed". Mr Trump has assured Japanese Prime Minister Shinzo Abe that Japan's interests will not be ignored. Japan is nevertheless feeling marginalised and has cause to be nervous, given Mr Trump's America First attitude. Will San Francisco really be sacrificed to save Tokyo?

Even if Japan is reassured about North Korea, the question cannot be avoided. China is modernising its nuclear forces and will sooner or later acquire a more credible second-strike capability against the US.

One way or another, the inherent logic of the situation will eventually lead to Japan acquiring its own nuclear deterrent within the American alliance system.

Japan, with American acquiescence, has been preparing for this eventuality for decades. The 30-year-old US-Japan Nuclear Cooperation Agreement is unique in allowing Japan to reprocess nuclear material, a privilege the US has granted to no other country. Where Japan goes, South Korea will follow. The possibility of a South Korean nuclear capability has already been openly debated in Seoul.

A five-way US-China-Japan-North Korea-South Korea balance of mutually assured destruction will eventually be established in North-east Asia. Russia and India will be secondary elements of this new Indo-Pacific strategic equation.

This is a geopolitical seismic shift that will freeze North-east Asia into a multipolar configuration. This preserves long-term manoeuvre room for the small countries of East Asia.

Getting there is still a long way away and will require wrenching decisions by Japan and South Korea. For the US and China, the result will not be ideal. But ultimately, this may be the least bad outcome and more stable than the present situation.

The US will not be indisputably pre-eminent in a multipolar order. But the status quo is already inexorably changing, and freezing it ensures that the adjustments in power distribution will remain relative, not absolute. The US will remain a major East Asian actor and the American alliance system will be preserved.

The view from China

A multipolar East Asian order means Beijing giving up the China Dream of a hierarchical architecture with China at its apex. But even before that, any improvement in US-DPRK relations is cause for concern in Beijing.

The JS is clearly about US-DPRK bilateral negotiations. China is not even mentioned. Mr Kim disregarded China and snubbed Mr Xi until he was ready to talk to Mr Trump. China can never be entirely ignored, but for now is relegated to a secondary role.

Still, from China's viewpoint, the JS maintains the DPRK as a buffer state. It significantly reduces the probability of a war that will jeopardise Chinese Communist Party rule. Beijing will take a deep breath, swallow hard, and support it.

Of course, follow-on US-DPRK talks could well collapse. But even if they do, there is no returning to the status quo ante.

This is not the six-party talks redux. North Korea's nuclear and missile capabilities were then rudimentary. The JS now in effect recognises North Korea as a de facto nuclear weapon state and a legitimate partner.

The JS will be widely supported, perhaps even by the United Nations. The DPRK is no longer isolated. The summit represents a too-long delayed acknowledgement by the US that the DPRK is here to stay.

Sanctimonious armchair critics will pounce on this to accuse Mr Trump of legitimising a brutal regime. This is theory, not reality. You deal with whom you must. The alternative is to ignore an issue that affects the peace and stability of all East Asia.

There was no mention of lifting sanctions. But even if talks crash, it will be very difficult to impose new Security Council sanctions. China and Russia have little incentive to agree and every incentive to loosen implementation of existing sanctions. After Chinese Foreign Minister Wang Yi praised the summit, its spokesman suggested international sanctions could be eased.

Mr Kim began his rule by proclaiming a Byungjin policy of dual military and economic development. Having done enough to declare victory on the first, it was time to turn to the second. Byungjin is unlikely to lead to Deng Xiaoping-style reforms. But there were already modest improvements in economic conditions and every prospect of more.

South Korea seems eager to promote economic ties as is implicit in the April 27, 2018 Panmunjom Declaration's endorsement of earlier North-South declarations adopted in 2000 and 2007. The latter spells out economic cooperation in some detail. Japan may be compelled to provide economic assistance too. Mr Kim has little incentive to risk his gains by being unduly provocative.

To naysayers downplaying the import of this summit, I would just ask: Is it in anyone's interest to see a return to tensions on the Korean peninsula?

The results of the Singapore summit are not perfect. But the summit was nonetheless "historic". To use an overused phrase, this is a "win-win" situation, even if the wins are not distributed with perfect symmetry.

Singaporeans can be proud that we were chosen as the venue. It was the consequence of decades of even-handed diplomacy.