The issue of Singlish and its place in Singapore crops up with regularity now and then. Its evergreen appeal as an issue in mainstream and social media suggests it is both an intractable, and emotive, issue on which consensus is hard to reach.

Singlish is used to describe a variety of English that is spoken in Singapore, that combines Mandarin, Chinese dialect, Malay or Tamil vocabulary, with a distinct syntax and pronunciation and often creative, truncated structure.

One take on the Singlish versus Standard English debate is that it is simply a case of using a different variety of language according to context and company, or more precisely, code switching. Another take on the matter is that English should not be debased, and should be spoken properly at all times.

The use of English in Singapore today is said to perform three functions: utilitarian, as a communicative tool between locals and foreigners; unifying - a common language amongst varying ethnic groups co-existing in Singapore; and universal - serving public and private domains such as the home, workplace and the law courts with equal efficiency.

A single standard variety of English would fulfil these functions very well, but the current reality in Singapore is that Standard English sits alongside a local variety. I would argue that we should not only accept this linguistic reality but also acknowledge the value of Singlish in the Singaporean context. 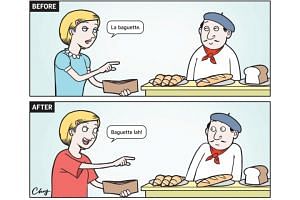 Don't play, play - Singlish is studied around the globe

I speak as a foreigner, who is the director of English at the British Council in Singapore, familiar with the teaching of English to people of different nationalities. In my view, Singlish can be seen as a linguistic glue that binds Singaporeans into a unique speech community. In social settings with friends and family, Singlish is often used. Singlish can thus be seen a marker of identity, originality and community with a dynamism and quirkiness all of its own.

Standard English can be used for study, work and more formal settings, especially when there are non-Singaporeans involved. In a global setting there is huge value in a standard variety with broad currency and it is entirely right that Singaporeans are encouraged to acquire and hone this valuable skill.

But I hope it is not at the expense of Singlish.

The current discussion, neither the first nor the last, I suspect, helps people think about the differences and considerations to make about when it's right to use one or the other variety of English. Much depends on the appropriateness of the social or professional setting, and the person's ability to code switch in the first place. Just like how a British national would not use 'received pronunciation' with friends in a social setting, there is no reason to tie Singaporeans to the use of Standard English at the void deck.

In the United Kingdom itself, we have a great deal of diversity when it comes to varieties of English, and I think the general view is that this enriches our culture. It is understood that you need to adapt the way you speak according to context. There is an understanding that when you venture out into the world, a more conventional way of speaking is what's required. If you don't understand this you'll soon run into trouble. If we were to suppress the rich variety of accents, dialects and slang we have in the UK, this would contribute to a loss of culture and diversity.

Of course this whole discussion on the role of Singlish is contingent on making sure that Singaporean children are able to speak and use the standard variety of English in the first place.

Schools and teachers play a critical role in teaching the standard variety and helping children understand and 'notice' the differences in usage. Children must be able to differentiate what is appropriate in different contexts.

Singlish is so ubiquitous in social use across public spaces, at the school playground, at the workplace and in homes, that every child growing up here will encounter it. It is thus important to make sure standard English is taught and spoken in a way that allows a child to understand its difference from the colloquial, informal variant used in Singlish. Well-taught, a Singapore child will feel empowered to be able to switch between the codes of Singlish and English at will.

It would no doubt be more efficient if there was just one Singaporean or even global form of English. But as societies around the world show, there is no such linguistic purity. Consider how much cultural distinctiveness, character and humour would all be lost if we were to achieve this 'ideal state'. That would be a world with no Singlish - and no Cockney English, no rhyming slang, no rap.

Singlish has a place in the national linguistic repertoire as a marker of cultural identity, and we should embrace its place amongst world As a teacher of English, I believe in celebrating diversity and hope that Singlish and English may prosper side by side in Singapore.

The writer is Director at the British Council Singapore.