SINGAPORE - Have you ever had to brush crumbs, left behind by the previous passenger, off your plane seat? Or dig up crumpled napkins from your seat pocket?

Just how clean are planes?

Besides arming yourself with sanitiser and packs of wet wipes, you can also put your inner germaphobe at ease by checking out Skytrax's updated list of the world's cleanest airline cabins before buckling yourself in for the long haul.

Singapore Airlines remains in the fourth position, behind Japanese carriers Japan Airlines and ANA All Nippon Airways, which were ranked second and third respectively.

The cleanest airline cabins belong to Taiwan's Eva Air, which moved up from second place in last year's rankings.

Other Star Alliance members like Lufthansa and Swiss International Air Lines were also among the top 20.

The cleanliness accolade is part of the World Airline Awards by Skytrax, which since 1999, has assessed airlines for different factors like cabin crew and in-flight entertainment through its global, annual airline customer satisfaction survey. 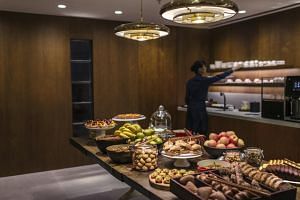 These are the most luxurious airport lounges in Asia

Skytrax's rankings are based on survey responses from passengers who rated the standards and quality of cleanliness in the aircraft cabin.

This year's World Airline Awards were decided by 21.65 million eligible survey entries from travellers of over 100 different nationalities.