SINGAPORE - A pavilion at Gardens by the Bay and a childcare centre lauded for their green design have won an international architecture prize.

The Future of Us pavilion and the Sengkang Riverside Park Large Childcare Centre were the two Singapore winners at the International Architecture Awards 2019.

They were chosen from a shortlist of 350 projects from 41 countries, according to a press statement.

The pavilion and the childcare centre won under the Exposition Centres and Community Centres categories respectively. More than 120 awards were given out this year.

The annual award is organised by The Chicago Athenaeum: Museum of Architecture and Design, The European Centre for Architecture Art Design and Urban Studies and Metropolitan Arts Press to recognise excellence in architecture and urban design globally.

Previous Singapore winners include the ArtScience Museum and the Yale-NUS college campus.

The Future of Us pavilion was set up in 2015 as part of SG50 celebrations, with the Centre for Liveable Cities of the Ministry of National Development working with Singapore University of Technology and Design (SUTD) on the project.

While visitors to the pavilion often marvel at its glittering facade or the enthralling play of light and shadows under its roof, the architects behind it also had sustainability at the forefront of their design.

The pavilion, now known as the SG50 lattice, comprises 11,000 unique aluminium panels with varying degrees of perforation to best suit its location in Gardens by the Bay, taking into account the prevailing wind direction and path of the sun.

As such, visitors feel up to 15 deg C cooler while walking under dappled sunlight that is reminiscent of lush tropical foliage, said Dr Thomas Schroepfer, 53, director of SUTD’s Advanced Architecture Lab.
“It is about creating a comfortable experience for an outdoor public space without relying on air-conditioning,” he said. 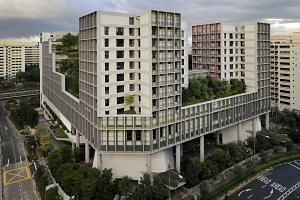 The other Singapore winner, the Sengkang Riverside Park Large Childcare Centre, which opened last year, was designed to resemble a “rolling hill” that blends into the landscape, complete with a green roof on which 12 plant species thrive.

The plants were selected together with the National Parks Board to complement local species and attract migratory birds in the area.

Mr Kee Jing Zhi, 41, director of Freight Architects which designed the centre, said the centre’s “living roof” not only provides visual relief for residents, but is also a heat barrier for the tall internal spaces, which improve natural ventilation.

By integrating the entire facility into the park and blurring the lines between outdoors and indoors, Freight Architects worked together with its client, School4Kidz, to create a richer learning environment, according to a write-up on the award’s website.

Bayfront Pavilion - From Temporary to Permanent