SEOUL (THE KOREA HERALD/ASIA NEWS NETWORK) - In the last few months, many parts of Myeongdong have been engulfed in an eerie atmosphere.

At the height of the tourism boom, the district was filled with foreign tourists, many of whom came from China.

The number of Chinese travellers, however, has dropped, stoking fears among shop owners in the posh shopping area, whose rents are the highest in the country.

The business community in Myeongdong and other popular tourist sites in Seoul are bracing for another blast, something worse than a mere drop in the number of Chinese tourists.

In retaliation for the deployment of the Thaad system in Korea, the Chinese authorities ordered its travel agencies to stop offering packages to Seoul and other Korean destinations, and the ban took effect on March 15. 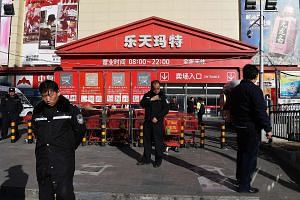 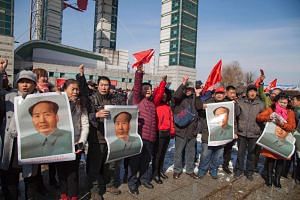 "I'm losing my job, completely out of the blue," Mr Uhm Sung-won, who worked as a tour guide for Chinese tour groups for five years, told The Korea Herald. "All reservations in March are already cancelled. And I'm not prepared to leave."

The current woes in Myeongdong, sparked by the Thaad deployment, is leaving shop owners with few options while Korea's political and diplomatic leadership has been crippled due to the impeachment trial of President Park Geun Hye over the influence-peddling scandal linked to her confidante Choi Soon Sil and the Samsung Group.

The number of Chinese visitors to Korea began to increase in 2013, when it outnumbered visitors from Japan for the first time in history. A wide range of businesses rode the dramatic boom, serving Chinese tourists, encompassing street stalls, lodging facilities, apparel shops, cosmetic stores, restaurants and duty-free shops.

But the bubble burst in the second half of 2016, and a severe downdraft is set to hit the district again in a week.

"There is no alternative left for us," said Ms Yoo Ho Ja, who works at a guest house near Myeongdong subway station. More than 70 per cent of visitors to the lodging facility, established in 2014, came from China.

Ms Yoo pointed at an abandoned white building in the same block out of a window from her office and said a new hotel is about to appear in the worn-out building.

"Although customers are on the decline (for several months), more and more hotels are sprouting up around this place," Ms Yoo said. "If this trend continues, it will be a big concern."

An owner of a Korean barbecue eatery stand, who declined to be identified, said that group travellers from China have been crucial for his business.

"Seven out of 10 customers are from the Chinese tour groups," he said. "And we are about to lose them."

It is also feared that the travel ban will impact the duty-free shops in Myeongdong. Some 70 per cent of Lotte Duty Free's income, the nation's top duty-free shop operator, is estimated to come from Chinese travellers.

Especially in the main branch in Myeongdong, more than 80 per cent of its 3.16 trillion won (S$4 billion) of annual sales came from Chinese tourists.

"We would have to watch the market for at least a month, since the travel ban has not been implemented yet," Mr Choi Ji Hyun, PR official of Lotte Duty Free, told The Korea Herald. "But we have to say that we are worried."

Some shop owners in Myeongdong said their income halved over the past few months. Since mid-2016, the Korean government and the media have denounced China's action to curb cultural exchanges between the two nations, calling it "retaliation" against the deployment of Thaad in Korea.

Gwangjang Market, another spot frequented by Chinese tourists located in Dongdaemun, Seoul, is also bracing for a knock-on effect from China's travel ban.

"Since issues regarding Thaad deployment splashed the headline, things here were quite bad," Ms Kim Sun Ja, who has been running a Korean blood sausage restaurant for 30 years in Gwangjang Market. "We are losing daytime customers."

"Our sales dropped by half, but it is fair enough for now," said Mr Ji Young Joon, owner of a nut shop, 80 per cent of whose customers are from China. "Still, I am concerned about the future."

Chinese visitors to South Korea at the tourist sites had mixed feelings about the Thaad row.

Ms Yi Ling, a Chinese student at Kyung Hee University spotted in Gwangjang Market, said that the Thaad deployment is a "sensitive issue" but said that travels and the Thaad issue are separate matters.

A Chinese part-time employee at a street stand in Myeongdong, who identified himself only by his surname Liu, said China's action is normal in terms of seeking national interest.

"Every country seeks for its own interest," Mr Liu said. "China is imposing a travel ban to protect itself. Korea would do the same if it was the other way around."

As China ratchets up its retaliation against Korea over the missile defence system, uncertainty is likely to increase for shop operators. But some owners remain optimistic.

"I hope the pain would not last long, because I believe the government will tackle this issue soon," Ms Yoo at the lodging facility said.

Other shop operators said the bitter relationship between Korea and China would soon settle down, as the tourist attraction has weathered a series of troubles over the past decades.

"We are not planning to lay off clerks speaking Chinese nor change business tactics," said Lim Myeong Sun, a shop manager at clothing brand Teenie Weenie that suffered a 40 per cent cut in sales recently in Myeongdong. "Remember, here we are in Myeongdong."

Kim Hong Chul, selling octopus barbecue at a snack stall in Myeongdong, is one of those who seeks alternatives on their own. Kim said he began learning new languages to draw more tourists.

"I've been recently studying languages from South-east Asia," said the 40-something seller, who saw a rapid decline in the number of Chinese customers in the wake of the Lunar New Year's Day this year. "Customers are changing, so I have to study to prepare for it."

Korea's central and regional governments vowed to reduce the local tourism industry's overdependence on Chinese tourists by reaching out to neighbouring Asian places such as Japan, Taiwan and Vietnam.

In an emergency meeting held at Seoul City Hall on March 7, the Korea Tourism Organisation and other tourism-affiliated industries discussed countermeasures against China's ban on travel to Korea.

At the meeting, officials discussed ways to increase the number of Japanese tourists, from 1.2 million last year to 3.5 million this year. In addition, they would focus on drawing in more individual Chinese tourists to fill in the void left by the absence of Chinese group tours.

But whether individual Chinese tourists would come remains uncertain, and shop owners are well aware of such uncertainty.

"It seems individual Chinese tourists would also refrain from visiting Seoul out of fear that they might be given a penalty," the tour guide Uhm said.