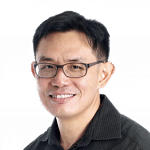 SINGAPORE - If you have spent any time at the beach, you will know that Singapore lacks the crystal clear waters that divers at regional dive haunts like Sipadan, Raja Ampat and Bali take for granted.

Unfortunately, as these dive spots are off-limits during the pandemic, the "crazy" idea to do a local dive trip came up.

A bit of searching on the Web led us to the YouTube channel of Mr Robert Tan, who goes by the nickname MRT-atis and regularly posts videos of his dives at Pulau Hantu, off Pulau Bukom, in southern Singapore.

My wife and two sons decided to see for ourselves if the videos he posted of cuttlefish, shrimp and nudibranchs were for real and signed ourselves up for a dive trip with him.

Our morning trip began from the Republic of Singapore Yacht Club off West Coast Road, where we took a 30-minute boat ride to Pulau Hantu (Island of Ghosts).

A friend of mine questioned the wisdom of diving at Pulau Hantu during the Seventh Month, when the Chinese believe that hungry ghosts are released from hell. He felt that we were tempting fate.

In truth, I was more worried about bad weather than hungry ghosts. September has been a rainy month and after it rained for almost 24 hours, just before our trip, we were blessed with a clear morning with blue skies and calm waters.

Soon after the boat pulled up to Pulau Hantu Kechil, the smaller of the two Hantu islands, the four of us put on our gear and jumped in. It felt uncanny to pull on dive gear without first getting on a flight.

Diving locally is a study in contrasts. The waters off Hantu teem with schools of fish swimming on the surface. But once you get in the water, the fish "disappear" because of poor visibility due to silt.

While visibility during our dive trip was at most 3m, the water was surprisingly clean. We found no litter or trash underwater. Our family practice is to pick up trash during our dives. We surfaced from both our dives empty-handed.

There was plenty to see underwater: fish, coral, nudibranchs of all shapes and colours, seahorses and other sea critters.

During one of our dives, we swam with one of the tamest batfish that we have ever met. It was so used to divers being around that we could get close enough to almost touch it. It continued feeding near us, as if to say: "You do your thing, I'll do mine."

We were thrilled to spend time with the resident rock fish of Hantu and to chance upon cuttlefish eggs that we had never seen before.

In between dives, we witnessed a garden eel perched off a patch of seaweed under the Hantu jetty, picking off curious small fish drawn to the dive boat.

The life in the reefs and the resplendent vibrance of the coral are a testament to the excellent work done by NParks in marine conservation over the years.

But take note that for these dive trips, divers must be reasonably proficient in their skills and be able to set up their own gear and tanks. In addition, they should be able to deal with current and poor visibility in the water and know what to do if they are separated from their dive buddy or dive group.

The Hantu dives reminded me of those in Israel, where divers are expected to rely on their own skills and gear, without the safety net of a dive guide coming to the rescue if they run into issues.

We enjoyed doing our own thing as a family. Not being with a dive guide was liberating. Our boys have done more than 50 dives and my wife and I have clocked 100, so we enjoyed setting our own dive routes and exploring Hantu's underwater treasures independently.

While on the dive boat, social distancing was observed at all times, with a maximum of five people in each area of the boat and face masks being worn, unless someone was eating or drinking or just before one entered the water.

More On This Topic
Interactive: Explore the unseen beauty of Singapore’s Southern islands

What's the verdict on diving in Singapore? The dives refreshed us and were a great time to bond as a family. I am pleased to find Singapore a Garden City, both above water and below it.

• The writer paid for these dives.

He writes an occasional column for The Sunday Times and is the chief executive of a medical technology company.