ROVANIEMI - It is midnight in Rovaniemi, Finland and I am floating face-up on a lake. Clouds drift slowly across a sky that never gets dark at this time of year.

I float for close to an hour, buoyed by a puffy red survival suit that makes me look like a teletubby on land, but keeps me warm and dry in the water. These neoprene suits are usually worn by crew on icebreaker ships. It keeps them afloat should they fall into the frigid water.

My itinerary is far less strenuous. Out here, in the middle of Finnish backcountry, there is little to do except watch the sky.

Located at the cusp of the arctic circle, Rovaniemi draws crowds in winter. December is peak season for tourists who come for sleigh rides, Santa Claus and a white Christmas.

But summer is just as enticing. When I visit in July, the crowds have long dispersed, pine forests have grown thick and lustrous, and the days are long and languid under a midnight sun.

It is a time when Finns head outdoors to fish, picnic and gather around campfires. My Finn For A Day experience at Apukka Resort involves all three, along with digging for worms to use as bait.

My guide Ms Noora Linna, born and raised in the Finnish countryside, merrily plucks worm after worm out of the soil. I, on the other hand, only overcome my squeamishness long enough to pick one up. It is soft and translucent, leaving a slimy trail on my fingers when I hold it up for a photo. 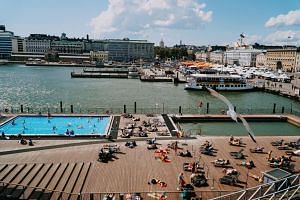 Worm hunting pays off later, when I feel a tug on my line and pull a small perch out of the water. Ms Linna helps me gut, clean and skewer the fish, which I grill on a campfire and pry apart with my hands. Even unseasoned, it is delicious and tastes sweeter for the effort I went through to catch it.

There are other satisfying meals. At Kesarafla Sauna, which doubles as a restaurant and bar, we join locals who alternate between stewing in a wood-fired sauna, and plunging into the brisk waters of the Kemijoki river to cool off.

This ritual is meant to promote blood circulation and its appeal becomes apparent after I scurry between the sauna and river a few times. The cold water is a refreshing shock to the senses, while the moist heat of the sauna feels like a warm hug. Doing this a few times lulls me into a gentle stupor, and I sleep extra well that night.

Even Finland's iconic reindeer get a break in summer, when there are no sleighs to pull. At the Santa Claus's Reindeer summer camp, about 45 adult males roam freely in a 20-hectare forest compound.

"All they have to do is sunbathe, shower in the forest rain, come greet people and look pretty for photographs," says Ms Johanna Kiviniemi, who leads our two-hour visit to the summer camp.

The reindeer, aged between four and eight years old, are among the 10 per cent of Finland's more than 400,000 reindeer who "work" in tourism - the rest are owned by herders but allowed to roam freely in the wild.

Those at the camp are tame enough to come when called, and brush their furry antlers against my hand as they tug willow leaves off branches I am holding.

Like Finland's seasonal landscape, reindeer evolve throughout the year. By August, in time for rutting season, the antlers of male reindeer will be at their largest and finest, having shed their coat of velvet. Males shed their antlers in winter to survive the bitter cold, while pregnant females keep theirs until they give birth in spring.

For reindeer herders, no part of the animal is wasted. Fat is used for cooking, hides offer warmth and milk is made into cheese, butter or even used in cosmetics. And the antlers, which weigh about 10kg on a five-year-old male, can be used to make everything from chandeliers to jewellery to traditional knives.

Mr Ari Kangasniemi makes these at his home studio Hornwork, which he runs with his wife Irene Kangasniemi. The couple also own reindeer - but I learn that it is impolite to ask how many.

"It is like asking someone how much money they have," says Mrs Kangasniemi, who explains that revealing the number may cause misfortune to befall their reindeer in the wild.

Instead, she plies us with homemade pie topped with blueberries, raspberries, blackcurrants and strawberries picked from the forest surrounding her home, and sits us down for a handicraft session.

A table in their workshop heaves with beads of various sizes, all made from various parts of the reindeer such as antlers and leg bones. The latter is dyed with natural ingredients such as blueberry and mushroom juices.

Mrs Kangasniemi's niece, who works at the studio, helps me select two matching antler tips, which I string together with a pair of beads to make a pair of earrings. It is the perfect souvenir.

Reindeer are not the only animal who call Finland's far north home. At Bearhill Husky kennel, we hear the dogs yelping long before we see them.

Some leap about in the cages as we pass, while others greet us standing on their hind paws. The 12 dogs selected for today's run are champing at the bit to take off.

"They love to run, and we just harness their power," says guide and dog yard worker Ms Ingrid Heinze as we climb aboard a six-seater cart. I feel that power while the dogs tear through a short circuit, a blur of brown, grey and white fur against the surrounding green forest, sending bits of gravel flying behind them.

Next, we meet some husky puppies, bundles of energy at two-and-a-half years old. We follow them on their daily walk where they run, unleashed, behind Ms Heinze.

When the puppies are a little older they will be trained to run in a pack, with a singular focus on the route. But for now it is good enough that they come when called, gambolling around us, earning kibble and hugs each time they do.

Rovaniemi is located on the cusp of the arctic circle, and everything north of this latitude including parts of Scandinavia, Canada and Alaska are known as the arctic. The exact latitude, demarcated by a painted white line, is located in Santa Claus village - a theme park that houses a petting zoo, snowmobile rides and what is purportedly Santa Claus' office.

Santa holds court year-round, and a two-minute chat with him is free. The big man is warm and friendly, chatting about my stay in Finland. Ask about his age, though, and he turns charmingly elusive.

"I tried to count once, but I got to the hundreds and fell asleep," he says.

Nearby, we visit the Santa Claus main post office, where letters to Santa are displayed - Father Christmas receives about half a million letters per year. Visitors can also send personalised letters from Santa himself, which will arrive around Christmas.

I have long stopped believing in Santa, but cannot resist addressing one to myself. When Christmas rolls around and I am baking in Singapore's heat, I hope it will transport me back to a halcyon Finnish summer.

The writer's trip was hosted by Visit Rovaniemi.

I flew on a 12-hour direct flight to Helsinki on Finnair, then took a one-and-a-half-hour domestic flight to Rovaniemi.

Mosquitoes are abundant in summer, especially if it has been raining a lot recently. Slather on repellent if you are heading outdoors.

Rovaniemi's attractions change year round. Summer brings long days and a chance to see the midnight sun from early June until early July. September and October are the best months to catch the northern lights, while December to early April is ideal for winter activities such as snowmobile safaris, snowshoeing and skiing.

Temperatures range between 15 and 25 deg C in June and July. Bring a jacket to layer up in the evenings, which can be windy.

Rovaniemi is a compact town easily explored on foot, but consider renting a car to visit attractions such as reindeer farms or husky kennels, which can be a 20 to 30 minute drive away.

According to Unicef, Finland's tap water is one of the cleanest in the world. Ditch the plastic bottles, bring a reusable tumbler and drink up.