SINGAPORE - Hiking gourmet trips in Provence, France, getting up close to mountain gorillas in Rwanda and Uganda, and trekking in Slovenia's Julian Alps should be among travellers' plans this year.

The Straits Times travel writer Lee Siew Hua and chief executive of luxury travel operator Scott Dunn Asia Chang Theng Hwee highlighted these experiences to an audience of about 300 at a talk about the Top 10 travel experiences for 2019 at the Central Public Library on Friday (Jan25).

The talk was organised by the Straits Times and the National Library Board (NLB) as part of the askST @ NLB series.

During the 1½-hour session, Ms Lee also described her travels to a number of places on the top 10 list including Antarctica and Seattle in the United States and gourmet hiking in Provence.

"There's the sumptuous sunlit face of Provence and also the face of adventure. There's a pleasure of sipping rose wine and there are also jagged mountains where the Tour De France goes through," she said of her trip.

Mr Chang gave tips on how to avoid tourist traps and talked about alternative ways to experience the different destinations.

Alaska, for example, may be known for its cruise holidays but travellers should visit fishing lodges rather than just hop on a jam-packed cruise and watch a cabaret show, he said. 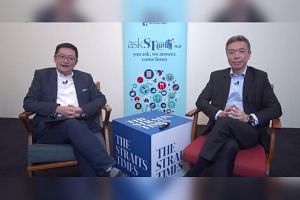 "If you go during the correct season and they're fishing for salmon at the lodges, that's where the grizzly bears are. Some of our guests who went there have brought back pictures with more than 10 grizzly bears," he added.

The best part is that these lodges only allow for a maximum of 30 guests so travellers do not have to jostle to see the grizzly bears, said Mr Chang.

"If you go to a place like Yellowstone National Park, it'll be 30 vehicles of tourists to one bear."

"I was a tourism student in polytechnic and I wanted to find out about what's trending in the travel industry. Luxury travel is very different and I found out more about the exotic places that people travel to," she said, adding that she liked the casual and candid format of the dialogue.

The talk was streamed live on the Rings.TV application and it attracted 766 views. The live streaming video can be replayed via the app, which can be downloaded from the Apple App Store or Google Play store.

The next askST @ NLB session will be on Feb 15, when Ms Lee and Mr Richard Launder, chief executive of destination management company Destination America, will talk about what is trending for travel in the United States and beyond. Registration is at str.sg/askSiewHua3.