Ms Jessica Goutama has been planning a fairy-tale wedding since she was a little girl.

When the Indonesian national - who was born and schooled in Singapore - got engaged to her Japanese-German husband, IT engineer Ken Tashiro-Meibergen, 34, she took the chance to fulfill her childhood fantasy.

The couple, who met and fell in love while attending university in California, took two years to plan their wedding bash - and spent $500,000 in the process.

The result was a solemnisation ceremony for 70 close friends and family members at the Disneyland Hotel in Los Angeles in November 2015, followed by a lavish wedding reception for 600 people at The Ritz-Carlton Millenia Singapore the following month.

For the 30-year-old bride, who works in the oil and gas industry, no detail was too small when it came to planning her fairy-tale-themed wedding.

Before the ceremony, the couple had photos taken in Paris, China, Hong Kong, Los Angeles and Japan and used those photos on their personalised menus and backdrops.

During the Los Angeles ceremony, Ms Goutama was taken to the ceremony in Cinderella's carriage, complete with a footman carrying the wedding bands in a glass slipper.

In Singapore, she sported light-up fairy wings that she bought in Hong Kong. 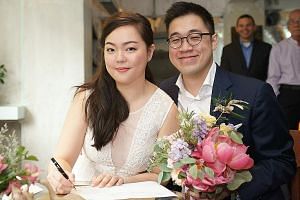 Bespoke wedding on a budget

The menu was designed to resemble a newspaper, because the couple love reading the papers. Guests signed on guitars instead of a conventional guestbook, as the guitar is her husband's favourite instrument.

The decor was a classic, neutral look, with fairy lights, candelabra and orchids and roses in shades of ivory and pink.

Butterfly-shaped placards, on which the bride had written the name of every guest, were placed on each wineglass.

When the couple cut into their towering eight-tier wedding cake, fireworks went off in the ballroom.

For the couple - whose parents paid for the flights and accommodation of numerous guests from overseas - the $500,000 price tag was worth it.

"I am so grateful that we got to have such a magical wedding and it meant a lot to be able to throw a great party for our closest friends and family," she says.