Club Med’s ski resort in north-eastern China may be a fraction the size of other resorts, but it is perfect for new skiers

It had snowed all night and in the morning, there is not a cloud in sight. The air is dry and crisp, a chilly minus 16 deg C, but there is nothing more thrilling than skiing fresh powder in sunshine.

The view from the top of the chairlift is expansive - snow-dusted trees and white snow-capped mountains as far as the eye can see.

I snap a photo with my smartphone to add to my collection of scenic mountain views. This could be almost anywhere in the world, but here I am, skiing in China.

The country will host the 2022 Winter Olympics and is touting itself as the next up-and-coming ski destination. Beijing will host the games and most of the ski events will take place at the ski fields in Chongli, Hebei province, north-west of the capital. There are now six resorts in Chongli.

Indeed, more ski resorts have been opening in China over the last five years, as the sport gains popularity among locals and its rising middle class.

Club Med opened a ski resort at Beidahu in north-east Jilin province last season, at the end of 2016. It is the French chain's second ski resort in China after Yabuli. It is here that I spend four days early last year.

Thredbo in Australia's Snowy Mountains, considered small by most snow hounds, has 70km of slopes. Vail, in comparison, has 2,140ha of skiable terrain with more than 190 conventional trails, excluding its off-piste areas, where people ski on unmarked or unpatrolled areas, in the back bowls and Blue Sky Basin.

Beidahu may be a fraction of the size, but it is perfect if one is a first-timer or beginner moving into braking and turning techniques such as linked snowplough turns and stem christies on groomed trails. There is plenty of piste, which are ski runs of compacted snow, to practise on.

But fret not if you are a more advanced skier or snowboarder - no one tires of being knee-deep in soft, dry powder on a sunny day. The texture of the snow is almost identical to what you might find at resorts such as Niseko in Hokkaido.

Beidahu also boasts a half-pipe, some boxes and rails for snow park junkies, but do not expect to hire twin tip or park skis here - Club Med offers only two types of downhill skis. There are no powder ski options either, so bring your own if you have a pair.

Near the half-pipe, there is an alluring slope of moguls, or a series of bumps and mounds on a piste, but my Australian ski instructor and Club Med host, Jack Ryan, 27, tells me they are not what they seem.

I do not get what he means - they look fun and fine to me. 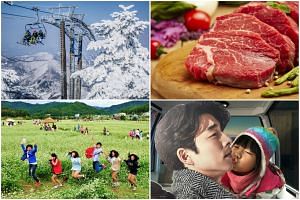 7 things to do in picturesque Pyeongchang

To make his point, he demonstrates skiing down the moguls, which involves technique, rhythm and quick turns. He trips up after four or five bumps because they are "too square, too symmetrical, and too close together", he says.

It turns out that, unlike most moguls, which form naturally around rocks and mounds of kickedup snow from quick turns made by skiers and snowboarders, these moguls are manmade.

Manmade ones can be good too, but at Beidahu, the boulders have been placed in direct alignment of one another, like dots on dice when you roll a six. And that is not how skiers typically navigate moguls - and moguls, if manmade, are usually placed in a diamond pattern.

I try, but lose my balance after skiing down a few - not so fun after all.

We break for lunch and head back to the resort's Lodge restaurant for our meal.

There is a separate section at the restaurant for children aged four to 11, who are part of the Mini Club. They are tucking into dishes including spaghetti, nuggets and fish and chips. Teenagers are grouped together in the Juniors' Club, while there is a creche for kids aged two to three.

The Lodge has a wide selection of international cuisine as well as a hot, made-to-order noodle bar. Make a sandwich with cold cuts and salad greens - the breads and croissants, which are freshly baked, are gorgeous.

While riding a chairlift after lunch, I am unpleasantly knocked on the head by a fellow skier with the safety bar. He pulled it down without checking with others on the same chair.

Well, luckily I am wearing a helmet, because it was a hard, inconsiderate knock. I tell him off and he laughs at me.

There is a universal alpine responsibility code, but it does not seem to be apparent here. A lot of it is common sense.

For one thing, load and unload lifts safely. A rule is not to stop where one obstructs a trail or is not visible from above. But many skiers here stop where trails merge or in the middle of the slope.

Another ski instructor, Victor Baudean, 26, who works with the Ecole du Ski Francais (ESF), a widely recognised ski school which is found at most major resorts in France including Chamonix and Megeve - Club Med runs its ski school in partnership with ESF - makes us spend the afternoon practising skiing backwards.

He hams it up for the camera with two backflips. Then, he races down the flagged course to show us how it is done. I film one of the backflips with my iPhone just before it goes kaput - low temperatures affect the battery. I had stuck a foot warmer on the back of the phone at the start of the day, but it had already lost its warmth.

I love that when you return to the hotel after a day of skiing, you are greeted with hot chocolate and mulled wine or apple cider - just like in many European resorts. If you need pampering, the resort also has spa and massage treatments.

The nights are spent with plenty of entertainment by the affable hosts as well as the kids, who put together a performance every day. For more after-hours play, there are ping-pong tables and karaoke rooms.

I will not forget my first time skiing in China. Great snow, perfect weather and a knock on the head.

If you are looking to take your family on their first ski holiday, Beidahu is for you. Fun, exciting and affordable.

The writer's trip was sponsored by Club Med. For more information about the resort, go to www.clubmed.com.sg/r/Beidahu/y