SINGAPORE - Singaporean art director Theseus Chan will make his mark at the Tokyo 2020 Olympic Games as he has been selected to create an artwork for the world's most prestigious sporting event.

The 58-year-old is one of three overseas artists, along with 16 Japanese artists, selected to produce works of art for the Games, said the Tokyo Organising Committee of the Olympic and Paralympic Games in an announcement on Tuesday (July 30).

He was named Designer of the Year at the 2006 President's Design Award, an annual award started by the DesignSingapore Council and the Urban Redevelopment Authority to recognise designers whose work makes a difference to the lives of locals and the global community.

It is the first time a Singaporean artist has been picked to contribute artistically to the Games.

"It's undoubtedly a tremendous honour to be invited to contribute my work to the Olympics," Mr Chan tells The Straits Times in an e-mail interview.

"It's excellent that there's international recognition for the Singapore's artistic community in addition to Singapore's gold medal (by swimmer Joseph Schooling) at the last Olympic Games."

"I hope my expression of the spirit of the Games will be energetic and positive. The world we live in today is highly complex and divided, and I hope the message of sports to bridge the world can be conveyed," he adds. 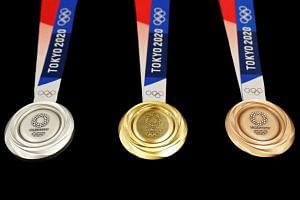 One year to the Olympics: Tokyo on track for largest and most eco-friendly Games yet

Over the course of his career, Mr Chan's works have been greatly influenced and inspired by Japanese designers, artists and musicians.

His self-published magazine, WERK, which he started in 2000 to experiment with design production, was featured in Japanese fashion designer Rei Kawakubo's label Comme des Garcons' direct mailer campaigns in 2016.

For Tokyo 2020, he will be joining the ranks of Japanese artists such as internationally-acclaimed manga artist Naoki Urasawa, known for 20th Century Boys and Pluto, and calligrapher Shoko Kanazawa.

Each artist will produce a poster artwork that encapsulates themes from the Olympic and Paralympic games by the end of the year.

The posters will be displayed in public spaces and featured on licensed products to raise awareness in the lead-up to Tokyo 2020.

Posters have been commissioned by the Organising Committees for the Olympic Games since the 1912 Games in Stockholm, where an official Games poster was created for the first time through an artistic competition.

In recent years, posters for the Paralympic Games have been specifically created for each edition.

Promotional posters, with easily recognisable imagery iconic to each edition of the Olympic and Paralympic Games, have formed the main artwork that helps establish each Games' look and feel.