While the circuit breaker period has intensified the load for some mums, many are seeing their husbands pull their weight at home and are also enjoying the quality time with their kids

There has been no slowdown for Ms Mavis Tan, 42, since the coronavirus pandemic hit. She had to guide her children in home-based learning (HBL), and when schools closed early last month, the stay-at-home mother set her children, Zach and Sara, daily "challenges" to keep boredom at bay.

As they stay indoors during the ongoing school holidays, her six-and seven-year-old kids have been competing to make crafts and toys in assorted challenges she stages, involving paper cups, Lego and icecream sticks.

Afterwards, Ms Tan, who is married to a 52-year-old Briton who works in corporate insurance, gets the kids to do a show-and-tell presentation on their projects on video, which she sends to their arts enrichment teachers for evaluation.

She also helps her children put together a series of videos featuring science experiments, singing and other activities for kids.

Strict circuit breaker measures and a shut-in school holiday, which began last Tuesday, have made parenting more challenging for her.

"It's overwhelming. We are all at home and we have had to take over some of the responsibility of the teachers, on top of our routine work, such as planning and preparing the children's meals," she says.

Many mothers like her report that the parenting load has intensified during the pandemic as families are shut in in confined spaces, shared with spouses who now work from home.

At the same time, some mums say the enforced proximity has pay-offs such as increased, even if unplanned, quality time with their children.

The additional parenting burden has contributed to rising stress levels for mothers, which may lead to poorer mental and emotional health, a recent survey has found.

The survey on the state of motherhood in Singapore, by Focus on the Family Singapore, found that 60 per cent of mothers reported stress levels of seven or higher, on a scale of one to 10, with 10 representing the most stress.

This contrasts with 52 per cent of mums reporting similar stress levels in the same survey last year.

Main priority is to keep her frail child safe

Conducted from March 18 to April 20, which takes in the start of the circuit breaker on April 7, the survey had 1,076 respondents.

Mum guilt is the feeling of guilt, doubt or worry when mothers think they are failing as parents, or falling short of expectations of what a mother should be.

Mrs Joanna Koh-Hoe, chief executive officer of Focus on the Family Singapore, notes: "Coupled with this year's findings, it would appear that Covid-19 and the extended circuit breaker is adding to the physical and mental load that mothers carry in terms of caregiving and household chores."

The mental load, she refers to, also known as emotional labour, is traditionally borne mostly by women. It describes a constant stream of thinking, planning and organising for one's household, which is usually accompanied by a low-level hum of anxiety about the well-being of one's family.

Such work can range from scheduling activities to keep a toddler occupied, to supporting a child in his HBL, to remembering when a baby's vaccinations are due, to noting when to buy a birthday present for the mother-in-law, to keeping track of what groceries need restocking.

With families staying in together all day, the mental load of incessantly planning and organising, for example, meals and activities for the household, has become "more visible" under Covid-19, says Dr Aliya Hamid Rao, an assistant professor of sociology at the Singapore Management University.

Additionally, mothers are also viewed as being physically responsible for more of the childcare.

But one dividend of this unusual time, says Dr Nilanjan Raghunath, an assistant professor of sociology at the Singapore University of Technology and Design, is that family dynamics may change, with some couples seeing less imbalance in their co-parenting.

"Even though mothers are multi-tasking more than ever, dads, too, are doing more for the family," she notes.

This was what happened in Ms Nur Hafizah Sulaiman's household during HBL. The 37-year-old sales manager often left the supervision of her three children - Mika Asidq, eight, Leia Sarah, six, and Lana Rose, four, - to her husband, freelance trader Mohammed Fariheen Mohamed Faroukh, 37, as she ducked behind closed doors to attend to calls with clients.

He became the dominant HBL parent as his schedule was more flexible than hers. Previously, she was the only parent engaged with the children's academic work.

She says: "I step up when I need to and he does the same. It's about give and take."

The uncertainty surrounding the coronavirus has also led many parents to re-assess their parenting priorities.

Ms Violet Lim, 40, who co-founded dating agency Lunch Actually with her husband, Mr Jamie Lee, 44, has had to deal with some surprises in recent months.

Both of them were hospitalised after they contracted Covid-19 following a work trip to the United States in early March.

After she was discharged from hospital, she had to quickly adjust to being an HBL guide to her daughter, Cara, 11, who has attention deficit hyperactivity disorder and sometimes finds it challenging to pay attention in school. Ms Lim was pleasantly surprised to find her thriving under HBL.

Cara, who has a brother, Corum, 14, learnt at her own pace and ticked off the assignments each day, completing them ahead of time.

Ms Lim says: "Covid-19 has reinforced my view that my parenting has to be focused on preparing the children for any eventuality, whether it's imparting values or skill sets.

"Increasingly, with all the uncertainty in the world, we want to make sure they learn to be independent and to make good decisions."

Beyond academics, she has since been guiding her children in building resilience, such as encouraging them to be intentional in how they react to events. For example, they can choose to stay positive, rather than be consumed with negativity, when reading unremitting news reports about the virus. 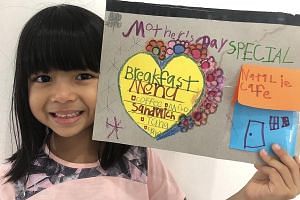 Meanwhile, nurse Amy Teoh, 33, is finding life more relaxing, even though her role as an essential worker is demanding.

The senior staff nurse at Tan Tock Seng Hospital, who has been deployed at the National Centre for Infectious Diseases screening centre, works the night shift now.

To reduce the risk of infection, she showers before she leaves work, and again when she arrives home to be with her husband and three children, aged eight, five and three.

She says: "I'm more relaxed about parenting as I've delegated some responsibilities to my husband and children." She appreciates living in the moment, joining in as the children play hide and seek at home.

Covid-19 has also made Ms Judith Alagirisamy, in her late 30s, reflect on her beliefs about being a mother. "As a mum, I had a sense of needing to do everything and to do it well."

The mother of two boys, Micah, 12, and Ezra, 10, is now more willing to ask for help from her husband, teacher Savarimuthu Xavier, who has, in turn, started buying groceries for her parents.

Time seems to pass differently during the circuit breaker period. Where once there was a rush to keep to a schedule of enrichment classes for Ms Judith's kids, there are now family movie nights and unhurried evenings.

Micah is learning basic Japanese on the Duolingo app and Ezra is writing his own stories.

Ms Judith, who works in the non-profit sector, says: "I've realised that as a mum, your life can be simple and quiet, and still be really good."

A version of this article appeared in the print edition of The Sunday Times on May 10, 2020, with the headline 'Parenting changes amid pandemic'. Subscribe
Topics:
More
Whatsapp Linkedin FB Messenger Telegram Reddit WeChat Pinterest Print Purchase Article Copy permalink