Single and ready to mingle (in an online shopping festival)?

You might have heard of Singles' Day, which originated in China and takes place on Nov 11 every year.

How did it all start?

Students at Nanjing University first celebrated Singles' Day in 1993 to appreciate those who were single. They picked Nov 11 (11/11) as it resembled the number one. 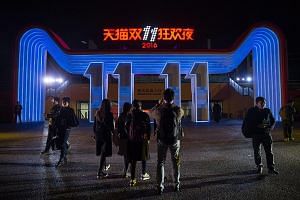 All systems ready for Singles' Day buying spree in China 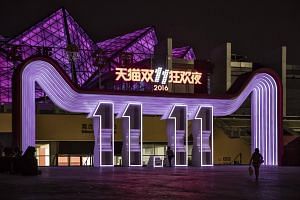 What is traditionally eaten on Singles' Day? Fried dough fritters (youtiao), of course, as it also looks like the number one.

The embracing of the occasion perhaps has to do with the rise of singlehood in China due to a gender gap - by 2020, China will have 35 million more men than women.

Singles' Day is an opportunity to treat yourself, and buy the things you've always wanted.

Alibaba capitalised on this and first launched a massive marketing push around Singles Day in 2009, offering special "Double 11" deals.

It was ideal for the company as Nov 11 falls on an autumn holiday lull - between the brisk sale period before China's National Day in late September and the Spring Festival at the start of the year.

Alibaba has announced that Singles' Day will be held over 24 days this year, starting on Nov 11, instead of just one day.

Last year, the occasion brought in an estimated global turnover of more than 91.2 billion yuan (S$18.68 billion) for the company. It is a record that is set to be broken in 2016.

In the first hour of this year's Singles' Day sales, S$7.05 billion in transactions was racked up .

Alibaba's Cainiao logistics network forecast that the industry will handle 1.05 billion packages for Singles' Day this year, up 35 per cent year-on-year.

China Railway has launched an "E-Commerce Golden Week" service to facilitate express services for couriers from Nov 11 to 20. The service reaches 505 cities in China.

Mr Jack Ma, Alibaba's CEO, has spared no expense in marketing Singles' Day and has brought in global A-list celebrities to stir excitement.

In 2015, a three-hour television special was aired in the run-up to the midnight opening of the "Double-11" deals.

What other online shopping festivals are there?

Black Friday and Cyber Monday are popular e-commerce holidays in the United States that take place on Thanksgiving weekend. Black Friday takes place on the last Friday of November (Nov 25 this year) and kicks off the year-end holiday sales in the US, which end on Boxing Day.

In 2005, Cyber Monday, the Monday following Black Friday, was conceived to persuade people to continue their shopping online after the Thanksgiving holidays. While Black Friday also includes sales at physical stores, Cyber Monday is limited to e-commerce sales.

However, the sales total of China's Singles' Day trumps the US' top two sales - combined.

In 2015, Singles' Day generated US$14.3 billion, more than the sales total of US$5.8 billion of Black Friday and Cyber Monday.

Singapore's own Great Online Shopping Festival, organised by Google, ran from April 25 to 27 this year. It offered sales from supermarket FairPrice, online apparel company Zalora and airline Silkair, among others. The 2015 edition attracted over 400,000 shoppers.

The shopping holiday is gaining traction outside of China. US department store giant Macy's has an outlet on Alibaba's shopping platform Tmall selling pillows, jackets, kitchenware and the like, Bloomberg reported.

Other overseas businesses without brick-and-mortar stores in China are also taking advantage, from German shower nozzle makers to retailers of Italian coffee and French wine.

It revealed that 47.3 per cent knew of the "biggest shopping holiday", and 80 per cent are planning to spend S$51 to S$500 on Singles' Day. The items Singaporeans want to buy most during the sale are fashion, health and beauty and electronic goods.