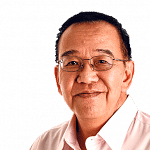 What more can I say about Jin Yong after all the millions of words that have been said and written about this greatest of all writers of wuxia xiaoshuo (Chinese martial arts novels) both before and after his death?

That he was my best-ever Chinese teacher? That he made me understand values like honour, courage, integrity and compassion towards all men? And the wisdom to accept human frailty for what it is and not be too judgmental about it?

I first started reading him when I was about 11. I was then living in a one-room tenement above a coffee shop, which provided free Chinese newspapers for its patrons. Jin Yong's novels appeared in serialised instalments in these papers.

So, each evening, before the coffee shop closed for business, I would be there, lapping up every word, courtesy of the owner who let me read the papers for free.

With no disrespect to all the teachers who taught Chinese in the schools I attended, I learnt the language this way. I was a lot more proficient in Chinese than English by the time I was in upper secondary.

As I found out later in life, a good number of the very effectively bilingual Singaporeans of my vintage - perhaps even the majority - went down this same joyous route to proficiency. And virtually every lover of wuxia xiaoshuo I know or know of, in and out of Singapore, would hail Jin Yong as the best writer of this genre and their all-time favourite.

I have read every one of Jin Yong's 15 novels, most of them at least twice. One in particular, Tian Long Ba Bu, I reread five times over the past 40 years. So what is it about his novels that I find so captivating?

I am no literary critic and not at all qualified to delve into the finer points of his writing. All I can say is that I remain ever so enraptured to this day by the silky smooth flow of his prose, the twists and turns of complex but never convoluted plots, the exquisite way in which he brought each character to life, and his infusion of Chinese culture, from poetry to music, and the essence of Buddhism into his works.

But topping all that is his masterly depiction of values that all should imbibe and uphold. Let me try to explain it this way. Wuxia consists of two parts, wu and xia. Wu means martial but xia is much harder to translate into English. A xia is someone who is chivalrous, stands up fearlessly for what is right and just, and cares more about humanity than personal glory.

True fans of Jin Yong are moved by the xia elements he wove into his stories rather than his description of the might of Shaolin martial arts or Wudang sparring skills.

Xiao Feng, one of the key characters in Tian Long Ba Bu, the novel I like best, is the very embodiment of xia.

Posted by The Straits Times on Wednesday, October 31, 2018

Xiao's defining act was to force the king of Liao, of which he was a subject, to withdraw from an attack against Song China and so spare both sides horrific bloodshed and destruction. Upon securing the king's pledge, he killed himself in front of both armies because he could not live with himself for turning against his leader even if it was for the larger cause of averting war and saving lives.

Much is lost in my quick translation and distillation of these concluding passages of the novel but when read in the evocative language in which they are penned, they can be profoundly moving. Tears still welled in my eyes each time I revisited this heroic moment when Xiao had to choose between loyalty to his king and keeping faith with humanity.

I also knew Jin Yong as Louis Cha, formerly owner and editor of Ming Pao, an influential Chinese newspaper in Hong Kong, and co-founder of the Shin Min Daily News in Singapore, to which I was seconded by The Straits Times for three years from 1983.

As editor, he wrote many stirring editorials on China that his fans remember to this day. That took courage. And it was because of his criticism of the excesses of the Cultural Revolution that led to threats to his life, which, in the end, forced him to take temporary refuge in Singapore.

By the time I joined Shin Min, Mr Cha was already back at the helm of Ming Pao in Hong Kong. But I had the good fortune to meet and talk with him twice in those three years.

He was soft-spoken, careful in his choice of words and had a certain air of confidence and dignity about him. He spoke both Cantonese and Mandarin with a Zhejiang accent.

I must have made some sort of impression on him for one day, out of the blue, he asked me, through an intermediary, if The Straits Times was interested in buying over Ming Pao. He had wanted to retire and felt the ST had the financial and editorial resources to take the paper to the next level.

After some deliberation, the ST decided not to take up the offer. Ming Pao is now owned by a Malaysian media group.

When news of Mr Cha's passing broke on Tuesday, it brought back memories of our association, through the millions of words that have so enriched my life as well as our conversations over dinner - about China, about journalism and about wuxia xiaoshuo.

I remember also the piece of calligraphy that used to be displayed in his office. It featured just two Chinese words, fang xia - let go or lay down the burden.

Mr Cha, better known as Jin Yong, made monumental contributions to modern Chinese literature but chose to let go when he stopped writing years ago. Now, he has finally laid down all his earthly cares.

May he rest in peace.

Leslie Fong is a former editor of The Straits Times