SINGAPORE - With the last day of school falling on Nov 16, the long holidays beckon, a prospect that may cause some parents to quail inwardly.

How to keep their offspring occupied during the six-week-long vacation, and how much it would cost to do so, are questions that cross the minds of some parents interviewed by The Sunday Times.

There are a plethora of enrichment camps and workshops available, which have school holiday programmes but these can cost a few hundred dollars.

Doing crafts, baking together, going on nature walks, and arranging play dates and outings are common, budget-conscious ways to keep the children occupied and not glued to their screens and computer games, the parents say.

Some families go a step further in organising creative holiday activities that are free or eminently affordable.

During the last long school holidays in June, for instance, Nicole Teo and her family made a Snitch. 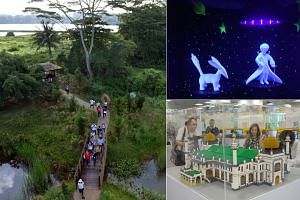 School holidays survival guide: 12 things to do that will not break the bank

Planning a holiday? Here are 10 tips for your year-end getaway

Nicole, 12, is a Harry Potter fan. A Snitch - whose official name is a Golden Snitch - is a quick-moving ball with wings used in Quidditch, a game played on broomsticks in Potter's world of wizardry.

To make the Snitch, her family of four transformed a ceiling lamp from Ikea, which they had previously fashioned, with the help of YouTube videos, into the shape of a Death Star, the iconic space station in Star Wars.

The Teo family did not spend much money on the Snitch, which still doubles up as a lamp in Nicole's bedroom.

The project involved masking tape, spray paint and plastic cardboard for the wings.

Nicole and her seven-year-old sister, Natalie, often spend their holidays on such budget-friendly upcycling projects, where unwanted or discarded materials are reused to create something new.

Also in June, the family converted an old loft bed set into a modified tree house for Natalie.

Using $2.50 planks of plywood, the frame of the "treehouse" cost about $100, a fraction of the price of a customised, full-sized treehouse, which might cost hundreds or thousands of dollars.

With dad Jason Teo, 44, a director at the ArtScience Museum, doing the heavier work such as drilling, the girls helped with tasks such as painting.

Their mother, 45-year-old Chan Sue Li, who runs outreach programmes at the Science Centre, says such holiday activities help her daughters learn the value of working for something worthwhile, as well as respecting the value of the everyday things they use.

"The bonding and teamwork involved helps us understand one another better," she adds.

For stay-home mother Lau Swee Yean, 49, surviving the long school holidays has involved heading outdoors to "keep up with the energy" of her four sons, aged 20, 18, 17 and 10.

Among the budget-conscious strategies she employs to engage her youngest, 10-year-old David, are outings, often with his friends, to parks and playgrounds, such as the Admiralty Park Playground, which has 26 slides and a climbing and obstacle course on a slope.

"It's not difficult to keep them occupied on a budget. It's just that you have to bear with the sweat and the heat or rain," says Mrs Lau, who is also a freelance storyteller with the Storytelling Association (Singapore).

She also involves David in household chores that he does not have time for during term time, such as going to the wet market , as part of sharing responsibility for the household.

For Ms June Yong, 38, a part-time writer and educational therapist, a little boredom can be a good thing for children.

The mother-of-three, whose husband, 38, is a wealth adviser in a bank, says the school holidays with all the kids indoors can be tiring for her, especially since she works mostly from home.

She says: "School holidays are a time to relax, catch up with friends and explore their interests. But it's not like they have to be 100 per cent entertained all the time.

"It's good for them to be bored sometimes. They learn to deal with that uncomfortable feeling, and learn that it's okay to be quiet and retreat into their own space."

Her children - Vera, nine; Javier, seven; and Joshua, five - often play together and she has noticed the boys, for instance, occupying themselves by reading books and drawing characters from them.

Vera is interested in art; she designs and paints on affordable cloth bags that her mother buys from Daiso and paints on pebbles that she finds.

Some parents are themselves looking forward to the school holidays.

Ms Rosemary Richard Sam's four-year-old daughter is in full-day childcare, so the hours the girl spends in preschool are unchanged.

But Ms Richard Sam, a senior events executive at the non-profit I Love Children, is looking forward to spending time bonding with her girl, Ariel Tijani.

There are many free activities in shopping malls, which bring in cartoon characters or which have water playgrounds for young children such as Ariel, says Ms Richard Sam, who is married to a 34-year-old businessman.

She says: "It's less busy at work for me at this time of the year and it's almost the festive season. It's an excuse for me to take leave to spend time with Ariel. My mind is more settled, more free."

1. Spend time with your children

"The more time you spend with your kids, the more quality time you will have," says Mr Sunny Naidu, the executive director of a charity, Family Life Society.

Investing time in being together strengthens parent-child bonding and what you do together need not be expensive, he adds. Going camping, taking walks and picnics together, or heading to the library are ordinary things that families can do together.

If parents are unable to take time off, "leverage on the community, family and friends" and let your kids enjoy themselves in ways they may not have time to, during the school year, he says.

2. Go easy on academic enrichment during the holidays

Many children do a lot of enrichment classes during the school year so consider taking them out of such an environment during the vacation, says Mr Naidu. "Find the right environment to bond with your child and find things that the child enjoys doing."

Mr Bryan Tan, chief executive officer of Centre For Fathering and Dads For Life, recounts an incident during a recent holiday, where he took one of his three children, four-year-old Joshua, to Changi Village and Pulau Ubin. Mr Tan wanted to talk to Joshua about the interesting features and history of the area, but the child wanted to play at the playground there instead.

"I saw his frustration... I realised that the time I had set aside was really for him. I climbed along with him at the playground for more than an hour. I saw the joy he had in his eyes," recalls Mr Tan.

"In the end, he asked me questions that I wanted to answer, such as about the bumboats and the beach. I found myself enjoying the process of learning together with him and doing things at his pace. I think all he wanted was for me to be there with him, and to have my undivided attention."