SINGAPORE - Apple's presence in Singapore is a 40-year, shape-shifting journey celebrating architecture, retail design and the user experience in its stores.

As far back as 1981, Apple was among the first global companies in Singapore to manufacture printed circuit boards for Apple II computers worldwide.

Its sleek five-storey office and two-storey production area stood out from conventional factory buildings at the time.

Officially unveiled on Thursday (Sept 10), Apple MBS is a giant geodesic dome with an oculus in its ceiling, inspired by the more than 1,800-year-old Pantheon in Rome - a celebration of light through innovative design.

The transparent igloo-like structure is made with 114 pieces of glass and held together by 10 vertical stainless steel "ribs" or mullions.

The bubble, which rests on a concrete foundation housing its two lower floors, is the world's first "floating" Apple store.

It is designed by global architecture studio Foster + Partners, which also conceptualised the Apple Park headquarters in Cupertino, California, in the United States, and several flagship stores around the world, such as Apple Orchard Road.

Apple's Jewel store, which opened in July last year, has a link to MBS as both integrated mall designs were originally conceived by Canadian-Israeli architect Moshe Safdie.

To counter the glare of the tropical sun streaming from all sides into the dome of the floating store, Foster + Partners architects designed concentric rings or "baffles" that get smaller as they reach the ceiling of the 30m-wide and 17m-high sphere so that it would not get too hot or bright inside.

Each baffle not only provides shade but also bounces the light up to the underside of the baffle located just above it.

Its interior is a column-free space with a 360-degree view of Marina Bay and a central video wall, where events such as Today At Apple, the free in-store educational sessions, take centre stage.

"Apple has always been at the head of the class in all aspects of design," says Mr Liyu, 19, who was first in line at the opening of the store on Thursday, after queueing since about 6am.

"The MBS store is an architectural marvel and the idea is truly brilliant," says the big Apple fan who started doodling Mickey Mouse shapes on his first Apple computer when he was two years old. "I started my creative journey with the Apple iMac G3 and have not looked back since."

"This simple idea of the dome required an extraordinary degree of expertise and innovation and also close collaboration with the Urban Redevelopment Authority and other government bodies, as well as our landlord partner Sands Corporation," he adds.

Before the razzle-dazzle of the retail stores, Apple first moved into a rented manufacturing facility in Ang Mo Kio in 1981.

According to Mr Terry Tay, who was then a partner of Architects Team 3, the tech giant later wanted its own factory in Singapore and conducted a limited design competition, which the firm won.

"The design brief embodied the company's philosophy: a factory for the people," says Mr Tay, 78, who is now retired. "It was really a breakthrough design for an industrial facility which set new standards for industrial design in Singapore."

He recalls how Apple's then director of Far East operations, Mr John Sanders, explained why the company placed a premium on the work environment, where people could freely interact, work, play and communicate at all levels. This philosophy was carried into the total design of the project both externally and internally. 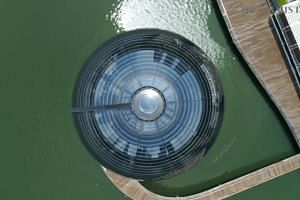 "We created a building that embodied a unique character, with an interior atmosphere that produced a good feeling for the staff, so that it inspired them to attain higher productivity levels at work," says Mr Tay.

He adds that the design of the building, which was completed in 1987, was ultra-modern and innovative. It stood out from its surroundings because of its precision finishing, clean modular lines and neatly detailed and meticulously executed exterior metal cladding - in short, "just like a well-designed Apple product".

According to Mr Tay, the design of the five-storey office and two-storey production area was far removed from the standard factory building template common in Singapore during the 1970s and 1980s.

Apple's design brief was also people-oriented, so it provided for more than just a utilitarian canteen for Apple staff, he adds.

"There was a staff relaxation and interaction area, a gym, a squash court and a roof garden, which were the first of its kind.

"The grounds were beautifully landscaped, and the perimeter was not bound by fences or walls. There was not even a security guard post - which were otherwise standard requirements for factory buildings," says Mr Tay.

According to Mr Braithwaite, Apple and Singapore's evolution since the 1980s has been "remarkable". With the new MBS store, the tech giant wanted to live up to the expectation of that continuing development. 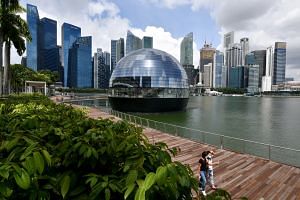 In Pictures: A peek inside Apple's new floating store in Singapore

"The unveiling we have begun and which we will be continuing really represents the diverse imaginations of Singaporeans," says Mr Braithwaite.

"We wanted to capture that dynamic movement and colours of the water in Marina Bay, which also signify the continuous flow of ideas and passions in Singapore."