This story was first published in The Straits Times on April 17, 2006.

SINGAPORE - His name may not ring a bell like hairstylist David Gan’s. But Chuando – or CD as he is known in the fashion world here – is the man behind Singapore’s hottest and most successful model exports in recent years, Serene Chew and Colin Wee.

And within fashion circles, the mere mention of his name causes his peers to become all hot, bothered and excited.

When news leaked that Life! would be profiling the model-turned-fashion photographer and modelling agency owner, many in the rag trade volunteered to wash his dirty linen in public.

Like tales of his diva fits when he was one of Singapore’s top male models during the late 1980s and 1990s. Or of how he had clashed with a fashion big-wig over a clothing loan for a photo-shoot years ago. Or stories about his past romances and his arrogance.

Tell him how fellow fashion hounds are just dying to hang him out to dry and Chuando, 39, simply fixes you with a steely gaze and says: “It’s all distorted.”

With the nonchalant air of someone who has heard it all before, he adds: “I’m an artist with a lot of fire. Naturally, I do things differently and this goes against what others are used to here.

“The herd instinct is strong in people. When one appears outside the herd and does things differently, they feel uncomfortable.”

For those clueless about who Chuando is, here is what you need to know about this controversial figure’s impressive CV: He entered the capricious world of fashion as a model at the age of 15. With his handsome features and muscular build, he soon fronted advertisements for the likes of Tangs, Club21, The Link and Metro, and became one of the top models in his agency, Carrie Models.

In 1996, after 14 years of modelling, he switched to the other side of the camera lens and became a fashion photographer.

Naysayers sniped that he could only make it in front of the camera. He silenced them by being a very good photographer and making pots of money. Today, clients include big names like L’Oreal, Mercedes-Benz, UOB and Tangs. 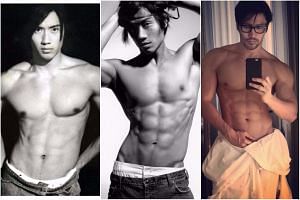 In fact, he is often attributed with pioneering the use of digital enhancement in fashion photography here. And in doing so, he single-handedly raised industry standards.

He is exacting in his craft, which is perhaps why epithets like “arrogant” - among the kinder ones - stick to him like chewing gum to shoes.

In 1997, not satisfied with his photography career, he set up a modelling agency called Ave, which was named after his old home in Sian Tuan Avenue.

Unlike other agencies which were still using full-bodied “glamazons”, Ave marketed itself as a niche agency for the superwaif look as epitomised by Briton Kate Moss. The way he sourced for models was equally unconventional.

He would spot them at a coffee shop near his home, which was a hangout for foreign students studying at nearby international schools. Ave’s preference for edgy faces - read not conventionally pretty - has met with considerable success. Its models, like Polish model Marek Olszewski and Singaporeans Chew and Wee, went on to score campaigns overseas for clients like Prada Sport, L’Oreal and DKNY.

Ave is now one of the top - if not the top - agencies here, with connections to international counterparts like IMG and Elite in New York.

While his successful career may provide grist to the mill, it is his reputation as Singapore fashion’s beautiful boy that has led to unending stories about him.

His love life, for example, has been unceasingly talked about since his modelling days.

To this, the bachelor says with some resignation but no hint of blame: “Some people have a lot of fantasies. But desire is only natural. It’s an animal instinct.” And he is indeed very handsome.

Nearing 40, he has the tawny complexion that Narcissus would gladly drown for and the masculine frame of a Marvel comics superhero.

He now wears his hair short and ragged, like a Dicksonian urchin. A short beard hugs his chin and lengthens his chiselled jaw.

“Don’t ask me how I maintain my looks,“ he says with a laugh during the interview at his sprawling Bukit Timah bungalow home which doubles as his studio.

“I have no time for the gym now and I eat McDonald’s all the time, especially when I have to work late.”

He is laid-back, candid and jovial, and has the air of a bad-boy jock who sits at the back of the class and spews wisecracks.

He says he works 20-hour days juggling between his photography and work at Ave, but, clearly, he enjoys it. In fact, so secure is he in his career that he can afford to be philosophical about his existence thus far.

“Chuando... this person that I become is an accident,” he says in a mix of halting English and Mandarin. “Things happened because I just followed my passion.”

The strut to the top was not smooth though.

He was born Tan Chuan Do in 1967 to a Hainanese family living in Toa Payoh. His father is veteran painter Tan Tee Chie, a respected expert on Chinese inks and wood-cuts who now teaches part-time at the Nanyang Academy of Fine Arts (Nafa). His mother, a clerk, died nine years ago. He is the youngest of three children. His sister, Dan Nian, runs Ave as its managing director, while his brother, Chuan Da, is a New York-based design director.

He attended Nanyang Primary School and later Pei Dao Secondary where he was a competitive swimmer. He admits that he was not the brightest spark in school.

“There were a lot of gangsters in my class,” he says, and he played truant “all the time”.

After his O levels, he set his sights on modelling overseas and enrolled in a private pre-university school in Cuppage Road.

“I wanted to come and go as I pleased. Private schools don’t care whether or not you attend classes as long as you pay up the fees.”

Lax school rules also meant he could indulge in rock music. With a friend, he founded a band called Naked Frontier which was modelled after The Doors. So passionate was he that he grew out his hair, wore tight jeans and sleeveless tees to ape his rock hero, Jim Morrison, much to the chagrin of his father.

His appearance also shocked his agency bookers. They threatened to fire him if he did not cut his hair but he stuck to his guns and told them: “If the modelling industry cannot accept the way I am, so be it.”

Their fears proved unfounded. At one of Carrie’s anniversary parties, stylists invited to the party were so bowled over by his unique style that they booked him for commercial jobs and runway shows. In 1985, the 18-year-old packed his bags for Milan and, later, Paris to try his modelling luck.

That period, he says, was a reality check. He recalls how foreign agencies would take one look at his portfolio and laugh at the quality of the fashion pictures.

It struck him then that Singapore’s fashion scene was backward. “Foreigners really looked down on our understanding of fashion at that time.”

He returned from Europe in 1988 to do his national service. He later enrolled in Nafa and in 1992 graduated with a diploma in graphics design and photography.

That year, he was spotted by the president of Italian brand Verri Uomo who was visiting Singapore, and flown to Milan to be its house model.

His second stab at modelling in Europe was shortlived and in 1993, he returned home as his mother was ill.

A singing career then beckoned when he was approached by a record company which promised him a lucrative future. Thinking that he could help shoulder the cost of his mother’s hospital bills, he took on the stage name Chen Yufei and embraced the life of a Mandarin pop singer.

“I didn't want to be a Chai-neese singer,” he says, exaggerating his words with disdain. “They are products of marketing hype. I wanted to be a respectable rock star like Jim Morrison. Imagine someone with aspirations like that to become a packaged idol, it was very...”

He shakes his head slowly and smiles. “I don’t want to say I was tricked... but what they didn’t tell me was that a singing career takes years before you start making money. I felt cheated.”

One mediocre album and 18 months later, he exited the music scene.

He realised that he could only be his best if he reclaimed control of his own destiny, and so returned to modelling. This time, he headed to New York.

But while he was easily impressed by the West before, he was less moved this time around. Of the photographers in the Big Apple, he says: “Some were unable to convey their vision from ideas to print. At that point, I realised I understood fashion so much better than them.”

He bought his first medium-format professional camera, a Bronica, quit modelling and returned home brimming with ideas on fashion photography.

But no one took the pretty boy seriously. “It was very, very tough,” he says.

Undaunted, he borrowed clothes for the models and did their make-up and hair himself.

His first photo spread was for Hot, a now-defunct magazine, and it was an instant hit. His documentary-like images spoke more of photojournalism than fashion. Editors and stylists sat up. Still, the bitching continued. He was criticised for everything, from how he used cheaper tungsten lights instead of more traditional, and expensive, power-pack lights, to his use of digital enhancement. (Some sniped that it was to cover up for inadequacies in his lenswork.)

“Fashion is a bitchy business. When a talent emerges, they will make him pay his dues and squash him before they let him join the fold,” he says quietly. “But I’m a straightforward person, I don’t play the game.”

Says veteran stylist Eddie Halim: “Fashion is ever-changing and about the moment, and Chuando gets it. If you don’t try new things, how can you push the envelope and capture the moment?”

But Chuando has clearly managed to win over his detractors, and the best proof that his metamorphosis from model to photographer is complete lies in this: His style is copied by all and sundry in the industry. If he seems more relaxed these days, it is because of a near-death experience. In 1997 while on a Bali diving trip, his oxygen tank almost emptied at a depth of over 180 feet.

“There are more important things in life,” he says softly. “I had all kinds of experiences. But whether good or bad, I learnt something from each.”

He reveals that his closest friends had advised him not to give this interview and “to keep my mouth shut”.

“My language is not very strong and they are concerned that I may say the wrong things and create even more misunderstandings,” he says.

But he agreed to talk because he has nothing to hide.

And just by staying true to himself, he may already have done so.