(BLOOMBERG) - Japan's corporate enfant terrible Takafumi Horie built one of the country's most successful Internet businesses, stood for parliament, went to prison and started a space company that aims to put the country's first privately funded rocket into orbit. Now he has a new frontier: cattle.

The founder of Interstellar Technologies has teamed up with his friend Hisato Hamada to form Wagyumafia, which brands, promotes and distributes Wagyu beef. Horie, 44, compares the soft, fatty meat with Domaine Romanée-Conti, a wine estate in Burgundy, France, that has built its brand into one of the most expensive in the world.

"While Wagyu is as scarce as good Burgundy, it has been sold cheaply by JA," said Horie, referring to Japan Agricultural Cooperatives, the nation's largest farmers' group. "I'm confident that the beef can be sold at much higher prices in global markets."

Since unveiling their first, members-only restaurant in Tokyo in September 2016, Horie and Hamada have opened three more shops. Membership has risen to 1,000, about 300 of whom are from overseas.

Wagyumafia has held tasting events in New York, Paris and Singapore and plans to open its first overseas restaurant in San Francisco next year.

"By mafia we mean a syndicate of ex-IT entrepreneurs," said Hamada, 40, former publisher of an online movie magazine. "Our project is to deliver Wagyu produced by selected farmers directly to global buyers, bypassing middlemen and without advertising. We find customers via social media and pop-up" events.

Wagyu comes from four Japanese breeds of beef cattle - Black, Brown, Shorthorn and Polled - that typically produce intensely marbled meat, with a higher percentage of unsaturated fat than most other beef. That makes the soft, flavourful steaks the world's most-expensive meat.

At Hamada's new shop in Tokyo's Roppongi district, a favourite area for foodies, Wagyu sells for 30,000 yen (S$359.73) a kilo. The cheapest bottle of Romanee Conti costs about 46,000 yen, with top vintages in the city fetching more than 1 million yen.

Wagyu prices are rising in Japan due to the increased costs of calves, Hamada said. The average price of a Wagyu-producing calf reached a record 852,287 yen in December, more than double the rate four years ago, according to Zen-Noh, the trading arm of JA. As many of the older farmers retire, companies are being forced to rear their own cattle to keep up supplies.

"To cope with rising costs for Wagyu calves, we decided to start breeding them by ourselves," said Aichiro Yamaguchi, a spokesman for Japanese retailer Daiei, a subsidiary of the nation's biggest supermarket chain operator Aeon Co. 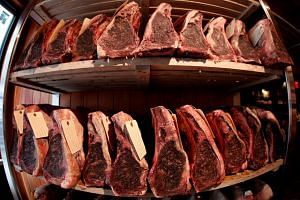 High steaks: The quest for the best beef in Singapore

Daiei, which operates Wagyu feedlots on the southern Japanese island of Kyushu, bought 15 Wagyu cows in December for breeding. The company plans to expand its herd to 500 by 2020 and aims to slash beef-production costs by 30 per cent, he said.

Hamada first met a Wagyu farmer when he was distributing Food, Inc. (2008), a documentary film about corporate farming in the U.S. A farmer who saw the film invited Hamada to visit his farm in the southern Japanese prefecture of Miyazaki.

The farmer, Muneharu Ozaki, feeds his cattle organic ryegrass and natural mineral water, with a home-made mix of 12 ingredients including barley and corn. He shuns additives such as antiseptics and antibiotics.

"What I want to produce is tasty beef that my family members can enjoy without any safety concerns," said Ozaki, who studied cattle farming for two years in the U.S.

Hamada was impressed by the taste of Ozaki's beef and his way of raising cattle. Later, while working as a a French movie buyer, he met three-Michelin-star chef Alain Ducasse, who told him Wagyu could become a killer ingredient for Japan in the global food market.

He and Horie, the former president of web portal Livedoor, are trying to build a premium brand as demand for Japanese beef soars overseas, especially in China, where food quality and safety has become an increasing concern.

Japan's biggest export market was Hong Kong which bought 353 tons in the first six months of 2017, followed by the U.S. with 201 tons. Cambodia, a transit point for Wagyu shipments to China, was the third largest buyer with 197 tons.

Japan reached a trade agreement with the European Union this year to eliminate tariffs on Japanese beef. The government aims to boost Wagyu exports to 25 billion yen by 2020. 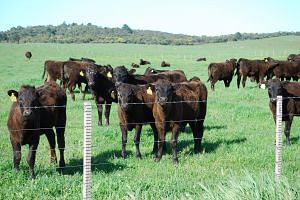 Australia set to beef up meat exports to China

"Wagyu is on the same path as sushi," which has expanded rapidly across the globe in the past decade, said Dan Christiansen, food director of MASH steak house in Copenhagen, the biggest overseas retailer of Japanese Wagyu.

Wagyumafia sources five brands of beef from 15 farms, including Ozaki's. The best known Wagyu abroad is Kobe beef, the top-grade meat from Tajima, an old province that is now in the north of Hyogo prefecture.

Tajima is a mountainous region in the west of Japan with few open fields, clear spring water and chilly nights.  Tajima cattle are smaller than other Black Wagyu types and their meat has better texture, said Kyukou Tanaka, a 42-year-old farmer from the area. The region produces less than 1 per cent of the beef cattle grown in Japan.

"Our cows have maintained a pure lineage over the past 2,000 years because they are kept in an isolated area surrounded by mountains," Tanaka said in an interview in Tokyo. "Their purity is the biggest difference from other types of Wagyu."

His 40-month cow was selected as the champion in the Wagyu contest of Hyogo prerefecture last year, and sold for 200,000 yen a kilogram.

"It's incredible. There is nothing like this," said American percussionist Lenny Castro after tasting Tanaka's beef at a Wagyumafia restaurant opening in September. "It's totally different from other beef."

Hamada and Horie are in talks to license Wagyumafia shops in the U.S., U.K., Hong Kong, Thailand and Macau.

"I'm always thinking how to hack the world," Horie said. "With Wagyu, I'll make my name known to the world."