(THE WASHINGTON POST) - How do you incorporate maple syrup into food? Here are some recipes.

Here, maple syrup is used as a ready-made simple syrup – think of it as a convenience ingredient that will not impart noticeable maple flavour.  It is adapted from a recipe at VermontMaple.org.

METHOD
1. Combine the water, lemon juice and maple syrup in a pitcher. Add ice and stir until chilled.
2. Pour into glasses filled with ice. Garnish with the fresh herbs of your choice, if desired. 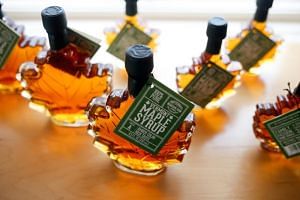 Vermont’s maple syrup business is booming, thanks to technology and changing tastes

Maple sweetness complements the corn without overpowering the pancakes themselves and it flavours the quick sauce as well. The corncakes and topping can be refrigerated a day in advance. Re-stir the sauce before using. The corncakes can be reheated in a non-stick skillet over medium-low heat, until just warmed through. The recipe is adapted from an EatingWell.com recipe.

METHOD
1. For the corncakes: Whisk together the cornmeal, flours, baking powder and salt in a mixing bowl.
2. Combine the milk, yogurt, maple syrup and oil in a liquid measuring cup, then pour into the dry ingredients. Stir just until evenly moistened.
3. Use a mixer to beat the egg whites or whisk them by hand, until soft peaks form.
4. Gently fold one-third of the beaten egg whites into the corncake mixture to lighten it, then add the remaining egg whites, folding until barely incorporated. A few white streaks of egg white may remain; that is acceptable.
5. Grease a large non-stick skillet with cooking oil spray and place over medium heat.
6. Working in batches, add 4 or 5 small dollops of pancake batter to the pan; cook for about five minutes or until puffed and lightly browned on the bottom, then flip them over and cook for four to five minutes on the second sides.
7. For the topping: Whisk together the yogurt and maple syrup (to taste) until well blended. Spoon over the warm corncakes.

There is a salty-sweet aspect to this quick dressing that makes us think it would be good to use as a dipping sauce for crisp spring vegetables as well.  The original recipe called for regular dark balsamic vinegar. In testing, we preferred the less-acidic result using white balsamic vinegar. The dressing can be refrigerated for up to one week; shake before using. This recipe was inspired by a dressing served at Pieous Pizza in Austin, Texas, adapted by BowlofDelicious.com.

METHOD
1. Combine the vinegar, yogurt, maple syrup, oil, salt and pepper in a jar with a tight-fitting lid. Seal and shake to form a smooth, emulsified dressing.

This is zippy and rich-tasting, with bits of onion and the chipotle giving it a nice texture. The sauce goes particularly well with grilled pork tenderloin. The sauce can be refrigerated for up to five days or frozen for up to a month. Defrost in the refrigerator overnight and stir before using.  The recipe is adapted from Perfect Party Food: All The Recipes And Tips You’ll Ever Need For Stress-Free Entertaining by Diane Phillips.

METHOD
1. Heat the oil in a medium saucepan over medium heat. Stir in the onion and chillies. Cook for about five minutes, until the onion begins to soften, then add the maple syrup, chilli sauce and broth. Once the mixture begins to bubble, reduce the heat to medium-low and cook for about 30 minutes, or until thickened a bit. Let cool before serving or storing.

Toss these on the grill – or in a grill pan – for a meatless main or as a sweet-smoky ingredient for your favourite salad. The mushrooms need to marinate in the refrigerator for one to six hours. The recipe is adapted from Dishing Up Vermont: 145 Authentic Recipes From the Green Mountain State by Tracey Medeiros.

METHOD
1. Whisk together the maple syrup, soya sauce and vinegar in a liquid measuring cup, then pour into a large zip-top bag. Add the mushrooms and press air out of the bag, then seal and massage to coat. Refrigerate for at least an hour and up to six hours.
2. When ready to grill, preheat a gas grill to medium-high (180 deg C, direct heat). If using a charcoal grill, light the charcoal; once the coals are ready, distribute them evenly in the cooking area. For a medium fire, you should be able to hold your hand about 15cm above the coals for six to seven seconds. Have ready a spray water bottle for taming any flames.
3. Remove the mushrooms from the marinade and pat them dry with paper towels. Season them lightly with salt and pepper. Reserve the marinade in the bag (for basting).
4. Arrange them on the grill; cover and cook for a total of eight to 10 minutes (the latter for thicker caps), turning and basting them with some of the reserved marinade, as needed.
5. Serve warm or at room temperature.

This rich and easy dessert has the creaminess of a well-churned ice cream, but no machine is required. For best results, use Grade A syrup that is labelled “amber colour and rich flavour”.  The base needs to be chilled for at least an hour and the mousse needs to be frozen for at least six to eight hours, and up to two weeks. For long-term storage, place a piece of wax paper or plastic wrap directly on the surface of the mousse in its sealed container. The recipe is adapted from Edible: A Celebration Of Local Foods by Tracey Ryder and Carole Topalian.

METHOD
1. Heat a few centimetres of water in a medium saucepan over medium heat. Pour the maple syrup into a heatproof bowl and set it over the saucepan; cook for four or five minutes. Once the syrup is bubbling at the edges, remove that bowl from the pan.
2. Whisk the egg yolks in a separate heatproof bowl. Gradually add 2 Tbs of the hot maple syrup, whisking, then add the tempered egg mixture to the rest of the maple syrup and whisk to incorporate.
3. Return the maple-syrup bowl (with egg yolks blended in) in the saucepan. Cook for 15 to 20 minutes, whisking, to form a thick and smooth base mixture. Remove from the heat.
4. Place a piece of parchment paper directly on the surface of this custard (to keep a surface skin from forming), then refrigerate for at least an hour, until completely chilled.
5. Beat the heavy cream in the bowl of a stand mixer fitted with a balloon-whisk attachment or a handheld electric mixer on medium speed until stiff peaks form (but be careful not to over-beat).
6. Stir 3 heaping spoonfuls of the whipped cream into the cooled maple base. Gently fold in one-third of the remaining whipped cream, and repeat two more times to incorporate all the whipped cream. No streaks of white should remain, but there should be some lightness and volume to the mousse.
7. Divide among individual ramekins or pour into a freezer-safe serving dish. Cover with plastic wrap and freeze for at least six to eight hours.
8. For easy scooping, let the mousse sit at room temperature for 10 minutes before serving.
9. Garnish each portion with a drizzle of maple syrup and the almonds, if using.