Home baker Susanne Ng gives chiffon cakes an innovative overhaul by baking them in all sorts of shapes and colours.

SINGAPORE – A home-grown baking enthusiast has gained worldwide fame for her elaborate-looking chiffon confections that look like they belong more in a toy shop than in a kitchen.

Housewife Susanne Ng, 37, has baked more than 300 chiffon cakes in a whimsical array of shapes and sizes, from animals and cartoon characters to gigantic hamburgers and castles.

On receiving widespread attention on her cakes, the mother of three says: "I have been baking such chiffon cakes over the past three years and never expected that they would go viral one day. I am thankful that more people now appreciate the hard work that I've put in."

Ms Ng documents her weekly bakes on @susanne.decochiffon, which has more than 23,000 followers to date. Among her chiffon creations are cutesy designs of fruits, flowers and princesses decked out in gowns.

She says: "I get ideas on what to bake from the occasional dream, my family's favourite stuffed toys that lay around my home and requests from friends."

One of her most popular bakes is a 20cm-tall Forever Friends teddy bear that is made of  vanilla and chocolate-flavoured chiffon sponge. She also has a Pusheen cat cake has a black sesame chiffon sponge body topped with a multi-coloured cone made of vanilla chiffon.

A former biomedical researcher, Ms Ng hung up her laboratory coat eight years ago to become a housewife. She took up baking about three years ago, intrigued by chiffon cakes baked by her friends at potluck gatherings.

One month into baking chiffon cakes, she got bored of typical flavours like pandan and orange, and started experimenting with colours and sculptures crafted from chiffon sponge.  Over the years, she has let her imagination run wild by giving chiffon cakes a creative overhaul for her three young children, aged 3, 5 and 8.

"The spirit of creating new things and getting excited over new ideas definitely comes from my background in research," she adds. "I always want to understand and control the various baking techniques."

Ms Ng spends about 16 hours to bake and sculpt a three-dimensional chiffon cake. She uses ingredients like lemon, chocolate, gula melaka, matcha powder and blue pea flowers to yield different colours in the cakes. She sculpts the baked sponge skillfully with a simple fruit knife.

The baking process is laborious as she bakes different coloured portions of the cake separately. A key challenge is folding the dyed meringue quickly and popping them into the oven as air bubbles in the batter form quickly, which leads to a rough cake texture. The final step is assembling the "foam-like" baked components with melted marshmallows and toothpicks.

Some of her recent bakes include a two-tiered tropical fruit-themed cake that resembles watermelon and pineapple, a kaya chiffon cake that looks like a larger-than-life burger, and a Charmander cake that is fashioned after an orange Pokemon character.

She says with a laugh: "These cakes may look cute, but they look like they belong in a horror film after slicing part of the 'head' off after eating them." 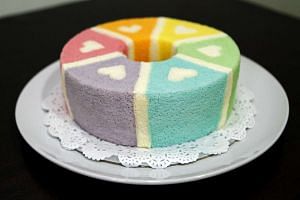 On whether if she plans to open a bakery, she says: "My priority now is to look after my kids, but perhaps when they are in primary school, I will have more time to fulfill my dream."