SAN FRANCISCO (THE WASHINGTON POST) - The cold, steely arm of Fernando the Barista swirled the foam of my matcha latte, set it down gently, and waved goodbye from inside a glass case. San Francisco, 2018. Where you can get robot pizza and robot salad, and, now, a robot matcha. With oat milk, but no latte art. Yet.

There were humans inside the small coffee shop in Market Street, but only some of them ordered drinks. Some of them came in just to gawk at Fernando: The machine was sleek and white, like an Apple product, and its glass enclosure made it seem like a small animal on display.

“They all have ‘it’ pronouns,” said Mr Sam Blum, Cafe X’s community manager. “Because it’s a machine. We’re not trying to say it’s a he or a she.”

But they all have names, because they have personalities – well, as much of a personality as a mechanical arm can have. They are programmed to be efficient first and friendly second; to busily fulfil orders and then wave to customers picking up drinks. Often, says Mr Blum, the customers will wave back.

“We have these different sort of personality traits that invite people to hang out with the robot a little bit longer and see what it has to offer,” said Mr Blum. Its gestures “invite this interaction, which creates warmth and a more human interaction.”

We expect warmth when people serve us food. So how do we replicate that when people are not the ones serving us at all? Two coffee companies provide a case study in robot-customer relations. On one side, there is Cafe X, and on the other, there is Briggo, an Austin company whose robot acts more like a machine than a human and is mostly kept out of customers’ sight.

“The idea of a peaked roof and the word ‘house’ gives you a sense of permanence and reliability and approachability that we think is really important around the emotion of coffee,” said Mr Kevin Nater, the company’s CEO. “People don’t really treat it like a robot; they treat it like a beautiful house.” 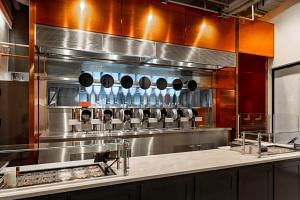 At Boston restaurant Spyce, robots have replaced the chefs

Inside the house, a robot is fulfilling coffee orders that were placed on the company’s app or a touchscreen in front. But it is not a human-like arm – more like an assembly line, albeit one making customised coffee. 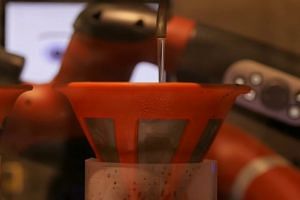 The coffee comes to the customer via a rotating panel. A glass window allows people to see part of the process – “the rest of the coffee house is really the less interesting things like a refrigerator and an icemaker that we didn’t think accentuated the experience,” said Mr Nater – and people regularly put their faces up against the glass to peer in.

“Every night, we’re cleaning some nose prints off of the window, which is always wonderful,” he added.

But it points to a paradox. The highly efficient machines are meant to operate in high-traffic areas such as office lobbies and malls, where people want to get their coffee made to order, but quickly – in one or two minutes, depending on customer volume. But the people who design them also want the humans to like them, and to like them, they have to get people to spend more time with them. People have been eager to take photos and video of their experience, both companies report. But it might not last.

“There’s a very strong novelty effect in human-robot interaction, which is that people are most uniformly delighted by robots when they first encounter them,” said Henny Admoni, an assistant professor who focuses on human-robot interaction at the Robotics Institute at Carnegie Mellon University. “How quickly that delay drops off kind of depends on the robot and what they’re doing.”

In this case, both systems are what Prof Admoni says is an open loop, which means the robot is acting, but not perceiving its environment.

“It doesn’t sound like these robots are particularly socially engaging their customers,” he added. “It’s a neat thing to look at. But it’s a very unidirectional kind of engagement, right? The human is looking at the robot, but there’s no back-and-forth.”

That’s where human employees come in. At both companies, they stand alongside the machines and explain the process to customers – help them with the app, or just answer questions. And they have been able to observe how customers act around the robots.

“Once you’ve been a product specialist long enough, you do know the cues that people give when they want to talk, and when they want to just get their coffee and get on their way,” said Anh Duong, who was standing beside Fernando greeting customers during my visit to Cafe X. Mostly, he added, they want to take Instagrams.

After all, humans like robots. They like them more when they have a certain blend of machine and human characteristics – think Star Wars' R2-D2 and C-3PO – and less when they look eerily close to human, an effect called the “uncanny valley.” Because of that, humans might initially form more of an attachment with Fernando, the robotic arm, than with the Briggo coffeehouse, which might look like a very fancy vending machine at first glance. But that might work out in its favour, said Prof Admoni.

Because here is another problem with robots in food service: The more we humanise them, the more people think they can do. If a robot has eyes, people think it can see. If a robot waves, people think it can sense your presence. And that can lead to elevated customer expectations, something that can hurt a business in the service industry. Because Briggo’s machine does not have arms, people might not expect as much from it, Prof Admoni said, and that is a good thing.

“I think by having a robot behind glass in this kind of clearly machine-like state, the company is actually successfully managing the expectations that people have of that system and setting it up to succeed more, because it’s worse for a system to raise expectations and fail to meet them,” he said.

Mr Nater would agree: After customers receive their beverage, the Briggo app asks them how their coffee was. The answers they get sometimes are not about the coffee.

“People want to marry the robot. People fall in love,” said Mr Nater. “No, seriously, we’ve had people come up to the robot and hug and kiss it.”

The company will soon expand to other cities in Texas and beyond.

But Prof Admoni is not totally sold on robot coffee. Studies have shown that millennials hate interacting with people, which has led companies to look towards automation for customer-service jobs. But food is more personal, and if we were to replace all food-service jobs with robots, we would have a lot to lose.

Even at fast-casual places, “there’s still an element of social engagement. And so I wonder how isolating it was to walk up to order on the touchscreen and walk up to a box and never have to speak to a person”, she said.

That was the case at Eatsa, a San Francisco fast-casual grain-bowl restaurant where, after you order via touchscreen, your food appears behind a glass window. No human or robot hands are ever seen. The restaurant closed all but two of its seven locations last fall.