(DAWN/ASIA NEWS NETWORK) - The British insist that the desi of the world, inspired by their delicious Scotch egg, created the royal looking and delicious nargisi kofta.

However, it was the other way round - the British sailed from across oceans, loved the look of Mughlai nargisi kofta and were inspired to create the Scotch egg, a traditional British dish of hard-boiled egg wrapped in meat, coated in breadcrumbs and deep-fried until crisp.

The Guardian quotes: “A theory asserts that the dish evolved from northern India’s nargisi kofta, an egg covered in minced meat and served with curry, which returning soldiers and others introduced to England.”

How pretty looking is nargisi kofta? Almost as pretty as the Indian film star Nargis, thought I. And then I remembered what my nani had told me long ago: “The name Nargis and the name of the food nargisi kofta come from the same source: the flower named narcissus.”

Ah, I thought, how interesting is our food history. And then nani elaborated: “The word nargisi comes from the word Nargis; a winter flower with a yellow centre with white petals around it just like a boiled egg. Nargisi kofta are hard-boiled eggs coated with minced meat and then cooked in gravy. When you cut the kofta, it resembles the Nargis flower.”

Named after a flower, the dish is as tasty as the flower is pretty.

According to The Oxford Companion To Food, nargisi kofta is a popular sub-continental dinner dish. 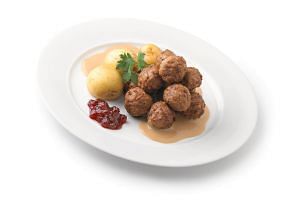 Food historian Annie Gray says: “I think you can pin down the Scotch egg’s introduction to Britain of the late 17th or early 18th century, and I suspect it came from India. Its forebear may well have been the nargisi kofta or ‘narcissus kofta’ — named after the flower’s white-and-yellow petals — which came to India from Persia with the Mughal emperors. The Mughals influenced two major regions with their cuisine — Awadh and Hyderabad — the egg is generally wrapped inside meat mince and fried, then served in a brown, yogurt-based gravy.”

Here is the recipe, from my kitchen to yours.